The Minneapolis Herald Tribune recently featured a story about two dear friends of mine, Sam Hanson and his son, Jai.  The story provides a timely message in bridge-building and one that during these divisive times will surely bring a healing balm. 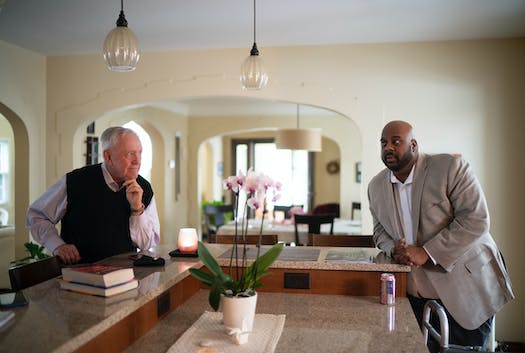 Not an either/or: Minnesota police officer and dad find common ground on race and policing. Police officer, ex-judge work to see eye to eye.  ~ By Reid Forgrave Star Tribune. Picture by Jeff Wheeler
Jai Hanson sat in his Bloomington squad car and focused on the police radio. A police precinct was burning. Rioters were looting. Looking north from his quiet suburb, he saw black clouds pluming from the city where he’d grown up.

Hanson felt his profession was under assault. He worried about police officer friends in Minneapolis, tasked with restoring peace in the days after George Floyd died under the knee of one of their own. Hanson was disgusted by the video of officer Derek Chauvin kneeling on Floyd’s neck, and he was disgusted at the destruction.

One moment that night felt most surreal. Between chaotic reports on the police radio, Hanson heard the emotion-tinged voice of a supervisor. “We took an oath to serve,” the supervisor said. “Just remember there are more people who support you than who don’t.”

The next day, Hanson and some police friends laid flowers at Floyd’s memorial. He wrote an emotional post on Facebook about officers dedicated to fighting injustice. “To the people that spent a few days protesting and judging me for not being there: Spare me your lecture,” he wrote.

Later, he drove to his parents’ house, and in their front window he saw a big sign. “SAY THEIR NAMES,” it read, listing people killed by police. Anti-police sentiment was everywhere. Now it felt like it was in his childhood home.

And Jai Hanson was furious.

The fault line that cracked open last summer between Jai Hanson and his father, retired Minnesota Supreme Court Justice Sam Hanson, is not a unique story in this divisive era. Disagreements lead to fractures — in politics, certainly, but in more intimate spaces as well: between neighbors, among friends, inside families. In the face of discord, people shut one another out. They unfriend. Mute. Ignore. Cancel.

This father and son had a disagreement. A big one. But they also had love and respect and an ethic of service — and a lifelong bond between a child from an orphanage in India and a big family in Minnesota. So amid their fracture, they decided to find common ground.

Worry and Pride
Life was going well for Sam and Mirja Hanson. By the mid-1980s, they had four kids and successful careers: Mirja as a consultant and adjunct professor, Sam as an attorney who would eventually become a judge. They prided themselves on being worldly and making that world a better place. Sam had cofounded a nonprofit, Global Volunteers. The Hansons wanted to adopt a child from India — both to help a child and to expand their family’s horizons.

The adoption hit bureaucratic delays and looked like it wouldn’t happen, so the Hansons adopted a boy from Texas in 1984. But a few years later came a call from an Indian orphanage: “We have a boy for you.” The Hansons decided to adopt Jai, too.

Jai was always introspective and diplomatic. He was a peer mediator at Hale Elementary School in south Minneapolis, and he loved asking his dad about intricacies of first-degree murder cases appealed to the Minnesota Supreme Court.

When he decided to become a police officer, his parents were surprised. They were scared as well, especially when he’d tell stories about disarming volatile people, or about being first on a murder scene. They worried that constantly dealing with people at their lowest moments could give Jai a jaundiced view of the world.

But they were also proud. Jai had gone into law enforcement for idealistic reasons. He can be firm or gentle. He speaks empathetically of those wronged by police.

A symbolic moment came when fellow Bloomington officers viewed the video of a South Carolina police officer shooting Walter Scott in the back in 2015.

“We were all silent,” Jai recalled. “Then someone said, ‘That officer just made our job a lot harder today.’ There’s that saying: Nobody hates a bad cop more than a good cop.”

But when Jai saw the sign in his parents’ window — “SAY THEIR NAMES” — his reflexive reaction was a defensive sort of anger. The sign felt flippant and anti-law enforcement. He drove off in a huff. Later, he wrote his dad an e-mail that the sign deeply offended him. In 14 years in law enforcement, he’d never heard his parents express sadness about a police officer getting killed.

A Second Sign in the Window
“I didn’t quite anticipate how much that sign would emotionally impact him,” Sam Hanson said later. “I probably should have.”

After reading his son’s e-mail, Sam Hanson took a breath and wrote him back.

He wrote that he’s obviously saddened when a police officer dies. Sam wrote that he and Mirja had visited the police officer memorial at the State Capitol and read names of slain Minnesota police. He told his son that after these emotional moments passed, Jai would realize his parents do support police — that senseless deaths of police officers, as well as of citizens at the hands of police, are both tragic.

“HONOR THEIR SACRIFICE,” it read, and listed names of police officers killed in the line of duty.

Jai Hanson believes law enforcement is an honorable profession. He loves being an officer; in fact, he’s considering running for Hennepin County sheriff. He believes policing has problems, and in order to reform, its leaders must acknowledge a past that’s been oppressive to people of color. But like most police officers, his instinct is to defend his own.

His dad understands that now.

“It’s almost an unconscious reaction to find a defense for the officer involved, knowing that but for the grace of God go I,” Sam Hanson said of his son. “When events like that happen, cops identify with the officer involved: ‘How did he get to that point?’ ‘Was this a dangerous situation?’ I on other hand tend to identify with the victim: ‘How did he get in the situation?’ ‘Why couldn’t police have handled this in a different way?’ ”

Yet the morning after Floyd’s death, Jai Hanson took to Facebook and did something rare: He publicly criticized another police officer. “My heart hurts for George Floyd and his family,” he wrote. “The officers involved have just made it a lot harder for every other officer that [does] their job with integrity, compassion and respect for all they encounter regardless of the circumstances.”

Tense Months
There was an unspoken tension between father and son in the months after. But they focused on other things — talking about family, going golfing, complaining about Minnesota sports teams — that would ease them into more substantive conversations about policing. Sam came to understand Jai’s gut defensiveness; Jai tried to tone that defensiveness down and think deeper when his father spoke of systemic racism.

They know that these overheated political discussions don’t need to be either/or, but instead can be both: Father and son are both anti-racism and pro-police. They agree policing needs big reforms but that “defunding” police is, as Sam Hanson put it, “immature and oversimplified.” They realize you can have empathy for police officers and the no-win situations they frequently face, as well as empathy for victims of police violence.

What Jai sees as a big problem with policing is exemplified by the family’s sign incident. Ultimately, they look at that incident as a failure to empathize, a failure to communicate. Policing, too, has a communication problem. Police, Jai believes, do a bad job of getting out their good stories, and a bad job of communicating when a tragedy happens.

It all starts with trust, he said. Communities of color have lost trust in law enforcement and perception becomes reality.

“The history of the whole system and how it’s really hurt people of color — we need to acknowledge that,” Jai Hanson said. “We’re in a position where we can change things, and we’re not changing.”

* As a postscript, Jai is planning to run for Sheriff of Hennepin County in 2022.