I’m stunned at the storming of the U.S. Capitol. it was an event so outrageous, so evil, so destructive, that it defies description. What has made it even more maddening for me is trying to say what it was really about, I mean really about.

To answer that question I’ve had to explore my own history.

I was 12 years old when John Kennedy was inaugurated president. I remember listening to his address in rapture. When he said, “Ask not what your country can do for you but what you can do for your country,” it was as if he was speaking directly to me. His words planted a seed in my soul that lives on within me to this day. 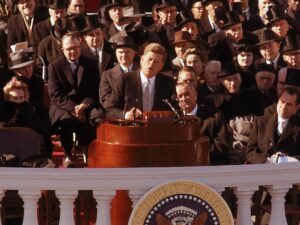 Eleven years later Neil Vance and I arrived in Washington DC to start our work and I saw the Capitol dome for the first time. I was awestruck. It was like gazing upon St. Peter’s Basilica.

I went on to spend the the next 10 years of my life working in Washington, and the Capitol would become a place of many endearing memories: lunching on bean soup in the senate cafeteria, traveling the underground passage between the two legislative chambers, passing the congressional leaders in the hallway as they rushed off to cast a vote, and making friends with the Capitol barber and shoeshine attendant. I was just one of many nobodies who came to cherish what went on in that temple of democracy.

There existed a civility and respect for those serving in government. Congressional decorum prevailed even in the bitterest of disputes. Compromise was seen not only as acceptable, but often preferred.

Attitudes have now changed, and after last week our national Capitol looks like a military encampment.

War broke out in Washington D.C. on January 6, 2021. An armed insurrection took place, summoning forth the long-simmering, never-extinguished evil that is deep in the soul of America. Those waging the war were individuals infused with the same poison that has been poisoning Americans since its founding: racism. The National Geographic reported the events of January 6 this way.

“When the insurrectionists came at the Capitol, they came with symbols. Some were immediately identifiable by most Americans watching the chaos unfurl on their screens. The Confederate flag, first swung on the country’s battlefields by secessionist states who saw their future in the enslavement of others; the gallows and noose, shorthand for the terrorization of African-Americans under Jim Crow as well as quick and dirty frontier justice. But there were other symbols, obscure visual handshakes that acted as a wink and a nod among the motley crews of Trump supporters, conspiracy theorists, and white supremacist groups that wreaked havoc and death upon the nation’s capital on January 6. Whether paraded on flagpoles or tattooed on the skin of seditionists, these symbols shared a common call, harkening back to an idealized history with white Christian men at the front and center.” 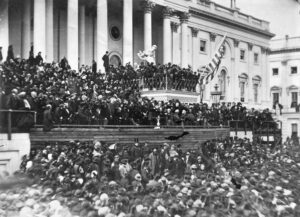 So as we prepare for the upcoming inauguration let’s return for a moment to that time, and to Lincoln’s transcendent message calling the nation to repentance, both north and south:

“If God wills that [the war] continue until all the wealth piled by the bondsman’s two hundred and fifty years of unrequited toil shall be sunk, and until every drop of blood drawn with the lash shall be paid by another drawn with the sword, as was said three thousand years ago, so still it must be said, ‘the judgments of the Lord are true and righteous altogether.'”

Listen with me, if you will, to a recitation of Lincoln’s Second Inaugural Address (less than five minutes in length):  Click here to listen