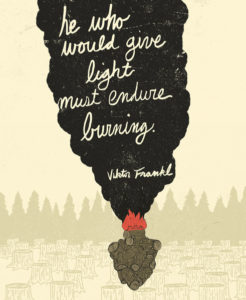 Rousseau said, “To endure is the first thing that a child ought to learn, and that which he will have the most need to know.”

I remember my Grandpa Pat sharing stories of the Irish Potato Famine (1845-50), crying as he spoke.  The collective tragedy was so great that it continues to scar the Irish psyche to this day.  Hard times may be collective, like the Potato Famine, or personal.  They may strike a family or a community.  How are such times to be endured? 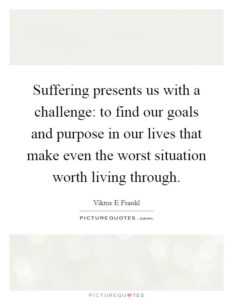 When I lived in La Conner, Washington 30 years ago my neighbor was a World War II veteran who had spent three years in a Japanese prisoner of war camp.  The horrors he experienced were quite literally unspeakable to him.  Before I understood this I once asked him to share his experiences of the war with me.  He just shook his head, no.  Later, his wife told me he was beaten so frequently over such a long period of time his nervous system itself was permanently damaged and he could easily fall into a suicidal depression.

He found relief in a little Pentecostal Church on the Swinhomish Indian Reservation.  On occasion I attended with him.  The service could go on for quite some time and become quite fervent, even ecstatic.  At times my friend seemed to leave the present and sway back and forth in a state of primal ecstasy.  When I asked him what he was experiencing he answered me with one word: “Love.”

Another story comes from Victor Frankl, an Austrian psychiatrist who survived the Nazi concentration camps of Auschwitz and Treblinka.  His book, Man’s Search for Meaning, tells the story of how he endured the Holocaust by finding personal meaning in his experience.  An excerpt:

“We stumbled on in darkness, over big stones and through large puddles, along the one road leading from the camp. The accompanying guards kept shouting at us and driving us with the butts of their rifles. Anyone with very sore feet supported himself on his neighbor’s arm. Hardly a word was spoken; the icy wind did not encourage talk. Hiding his mouth behind his upturned collar, the man marching next to me whispered to me suddenly, ‘If our wives could see us now! I do hope they are better off in their camps and don’t know what is happening to us.’

“That brought thoughts of my own wife to mind, and as we stumbled on for miles, slipping on icy spots, supporting each other time and again, dragging one another up and onward, nothing was said, but we both knew: each of us was thinking of his wife. Occasionally I looked at the sky, where the stars were fading and the pink light of the morning was beginning to spread behind a dark bank of clouds. But my mind clung to my wife’s image, imagining it with an uncanny acuteness. I heard her answering me, I saw her smile, her frank and encouraging look. Real or not, her look was more luminous than the sun that was beginning to rise.

“A thought transfixed me: for the first time I saw the truth as it is set into song by so many poets, proclaimed as the final wisdom by so many thinkers. The truth – that love is the final and highest goal to which man can aspire. Then I grasped the meaning of the greatest secret that human poetry and human thought and belief have to impart: the salvation of man is through love and in love. I understand how a man who has nothing left in this world still may know bliss, be it only for a brief moment, in the contemplation of his beloved. In a position of utter desolation, when man cannot express himself in positive action, when his only achievement may consist in enduring his sufferings in the right way – an honorable way – in such a position man can, through the loving contemplation of the image he carries of his beloved, achieve fulfillment. For the first time in my life I was able to understand the meaning of the words,  ‘The angels are lost in perpetual contemplation of an infinite glory.'”

If love is what allowed Victor Frankl and my old neighbor to survive and transcend unspeakable horrors, then I suspect love may be the key to how any one of us may endure, and even thrive, in our own hardest of hard times. 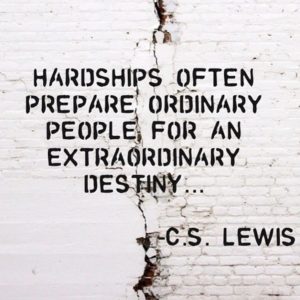