In my Roman Catholic upbringing, Easter, the culmination of Holy Week, was by far the most significant holiday of the year, and it has always been an especially reflective time for me.  This Holy Week a number of dear friends are experiencing what might be described as Calvary moments, a time when hope vanishes, darkness sets in, and one can feel utterly abandoned.  For many, the passage from Calvary to Easter seems impossible to navigate.  The question isn’t so much when Easter will arrive but whether it even exists, or whether it has anything to do with me.  This is the question I’ve been revisiting and the memory of a very old friend came to mind, a guy named John who introduced me to a new understanding of Easter.  Here’s the story.

It goes back more than fifty years to the early 1960’s when I sold newspapers at an annex of King County Hospital serving patients in need of extended care.  Indeed, some of my customers never left the hospital in the three years I sold papers there.

One such patient was John (I introduced him to you in an earlier post).  John was quadriplegic from a diving accident that severed his spinal cord.  He was only 17 at the time of his accident, a recent high school graduate from a small town.  His family was poor but John was smart, and was planning a career in aeronautical engineering.  All his hopes and dreams ended with the accident and what ensued was a series of additional devastating  losses:

Then both his parents died.  He had no siblings, so John was left utterly alone in the world.  Here was a guy left hanging on a cross forsaken, forgotten, with nobody to care whether he lived or died.  If ever there was a guy who had reason to shake his fist at God and curse his fate, it was John.  But somehow, someway he settled on a different response. 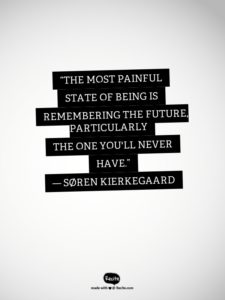 I met John when he was in his mid-thirties.  He lived in a room with another quad in a bed that was in constant motion to prevent bed sores.  His room was always a beehive of activity.  At first I didn’t understand why.  I soon discovered John had turned his prowess in mathematics into a sophisticated system of handicapping horses, developing algorithms entirely in his head.  He took a liking to me and hired me as his runner to call in bets with his bookie for the next races.

He was good, very good, at what was for all intents and purposes his job.  People traveled to see John and learn his method.  The scene was surreal: this totally paralyzed individual counseling smart people on how to handicap horses races.  The fact that he was in a bed in constant motion was immaterial to them and, more importantly, immaterial to John.

It was said of John, “If life had dealt him a bushel of lemons he bought another bushel and set up a lemonade stand.” 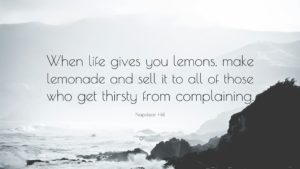 Sometimes life deals us a very bad hand with no good options, so we wander into our own Garden of Gethsemane and have the conversation that none of wants to have, but is the only conversation available.  John had that conversation and came out the other side as a man who would live his life and demonstrate that at the end of the day, ALL hands are playable.  If I hadn’t seen John be John I never would have believed anyone in his condition could or would have made a life for himself.  At that stage in my life, John inhabited a universe to which I did not yet have access.  It wasn’t till I was immobilized by drink that I finally got John.

I can’t tell you how John got from here to there.  But this I know: John seized on a truth known only by those who’ve been to the bottom and walked through the Garden to the other side.  These are ones who have accessed the Passover revelation and the Easter promise.  They are the resurrected ones. 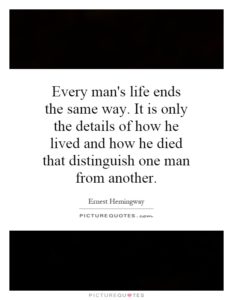