Sometimes a childhood event can become so defining that it is replayed a thousand times over the course of our life, reminding us of what we already know but somehow choose not to remember.

I grew up on a street that bordered a gully that we knew as Wolf Creek Ravine. I crossed the bridge over this gully each day on my way to and from kindergarten. 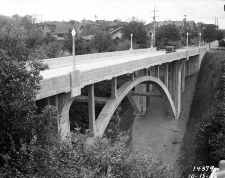 The gully was deep and wild and, oh, so mysterious. Mother insisted we never venture into it as it was not a safe place to play. The embankment was steep, the terrain treacherous and a creek often flowed during the rainy season.

There were many scary stories about what lived in the ravine: wild wolves, poisonous snakes, deadly quicksand and the ugly bridge troll.

It was a place to fear.

Then one day all that changed.

While crossing the bridge on the Friday before Mother’s Day in 1955 the neighborhood bully came up to me from behind, snatched the card I was carrying and threw it over the bridge and into the ravine. It was the Mother’s Day card I’d made for my mom.

I was angry, hurt and humiliated. I’d spent a week making that card and, in the blink of an eye, it was gone.

I went to bed troubled and spent the night wrestling with what to do:

Then I thought the unthinkable: I could descend into this frightening place and attempt to find it. 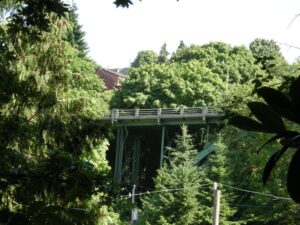 Shivers ran down my spine. Once I went down could I ever get out? Who would save me if I got lost? But yet, but yet, what option did I have? I had to do something.

By the morning I resolved to do the unthinkable and descend into the ravine to retrieve my mother’s card. I left early and told no one. In no time I found a path down the embankment. I slipped, slid and  tumbled my way down, ever keeping an eye out for the dreaded bridge troll.

When I reached the bottom I breathed a sigh of relief, looked up, and marveled at how far I’d descended. Then, with no sense of fear I ventured out in search of the card.

Much to my delight I came upon a treasure trove of cool stuff. Clearly, I hadn’t been the only one who had lost valued possessions to the ravine. I found:

Plus, much to my joy, I found my Mother’s Day card, a little muddied but perfectly presentable. I spent the next hour in utter amazement, exploring the ravine.

The moment was sentinel for me because I am not a courageous man. Fear is my frequent companion.

Like when my brother Steve called me with the news he’d been diagnosed with stage 4 pancreatic cancer. I remember sitting in stunned silence, paralyzed in fear. It was as if the Angel of Death had arrived at my door as it had arrived at Steve’s.

There was nothing I feared more than death. Maybe because of my dad’s untimely passing the grim reaper stalked my psyche with a poisonous fear that it was coming for me. I slept little that night.

When dawn broke I went out for a long run. It was then I was visited by six-year-old Pat looking over the rail of the gully bridge. He was saying, “Descend, Pat, descend.“

I finished my run and knew what I had to do. I caught the next plane to Seattle and spent the better part of the next two years with Steve, sharing countless “final” moments with my dearly beloved brother. When he passed in 2009 all that could be said had been said.

Over the course of my life fear has been a regular visitor, the source of many desperate moments. Through it all I’ve had a six-year-old boy standing as sentinel, admonishing me, “Don’t flee. Descend into your fear as you did into Wolf Creek Ravine and there you will find a treasure trove of wisdom.”

The little one is right! 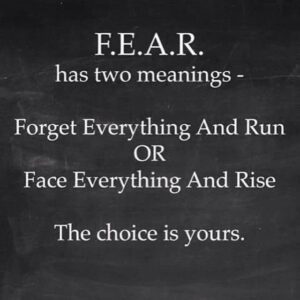