On the 14th of June I will complete my 35th year of sobriety. I thank God for 12,775 sober days and remind myself to focus only on today.

I recently had a conversation with a dear friend who’s had a difficult time staying sober. I’ve watched him battle this insidious disease for more than 28 years. He’s stayed with it, and each setback deepened both his understanding and his commitment to sobriety. He recently shared with me a story of what it’s like to live with this disease. It so rocked me I’d like to share it with you.

There was a man who had a python as a pet. He formed a close bond with the snake and held it, talked to it and let it crawl over him. He became so attached to the snake that he let it sleep with him at night, as others do with their pet dogs or cats. The python would curl up next to him, and in his minds eye, it was simply returning to him the affection he felt for it. 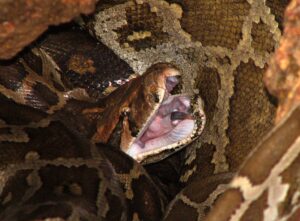 After weeks of sleeping with the man, the python suddenly stopped eating and the man became increasingly concerned. One afternoon while the snake lay nestled next to him he called his veterinarian to see what might be causing the snake to refuse food. The vet listened closely as the man recounted his warm and tender history with his beloved snake.

Then the veterinarian stopped the man in mid-sentence and asked him in a slow and deliberate tone to describe precisely what was transpiring with the python at that very moment. What was the exact position of the snake, he asked. Was it lying straight or curled up? The man said it was lying perfectly straight.

The vet said, “Now, listen to me, and do exactly as I say. I want you to slowly move yourself off the bed, and then to quietly leave the bedroom and close the door tightly behind you. Do you understand me? Now move, now. I mean right now!”

The man did as he was instructed and once he was out of his bedroom, asked the vet, “What on earth was that all about?”

The vet then carefully explained what was going on. In the scene the man has just described, the snake was in the act of sizing him up, literally. It’s what all pythons do before they eat their prey. This python was waiting for the right time to eat him whole.

My friend said when he heard this story, it described how he experienced his dance with alcoholism. How, when he let his guard down, the seductive pleasure of getting high would at first seem harmless, until it turned and began to swallow him whole.

I was taken by his story, gratefully so, for it reminded me once again how this cunning, baffling and powerful addiction works.

As I am about to enter my 36th year of sobriety, I intend to keep the python story close, a humbling reminder to respect the predatory nature of addiction, and to keep my distance from the serpent.