My husband and I recently saw a wonderful play called Everybody which was uplifting, hilarious, and joyful. It was also about death. 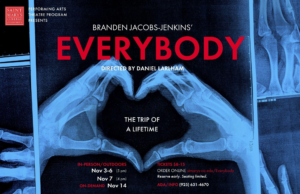 That seems like an oxymoron, but the central message is that everybody dies and you have to take that journey alone. The only thing you can take with you is love. Furthermore, you can joyfully dance to your death.

As great as the play was, and I do recommend it, it also held a lost opportunity. The play was based on an ancient work called Everyman which was written around the year 1500.

I immediately had my antenna up when I read this in the program:

“Of course, taking any mention of repentance and confession out of the script was the first step in making Everyman modern.”

Why? Aren’t those still important steps in any spiritual journey, in any faith? Isn’t confession and repentance exactly what every addict must do to be healed?

Afterwards, I read the original story of Everyman. The persona of Death comes to a man who has not cared about others or done good deeds. He wants his friends and loved ones to journey with him. He wants to take his possessions and his wealth. He comes to learn none of that will accompany him. Even his senses, strength and mind will ultimately desert him.

He is visited by the persona of “Good Deeds,” who is very weak and dying. He learns only she may go with him, but she is weak because he rarely nurtured her in life. He must make her robust by confessing his lack of compassion and repenting. Once he does this, he is forgiven, Good Deeds becomes well, and goes with him into the grave.

Why are we so afraid of the concepts of confession and repentance? Perhaps they are too heavily laden with destructive religious guilt. If so, I feel strongly they need rehabilitation.

In my own journey with destructive eating, if I shared something shameful with girlfriends, they might say, “Oh, it’s not your fault. Here, you deserve a piece of cake.” Or, “Have a glass of wine!”

In our society it sometimes feels as if nobody is ever at fault for their own actions or for the consequences. And, while it helps us be compassionate when we learn how a horrific upbringing led to bad behavior, ultimately it furthers the destruction to push down guilt and shame, making excuses and ignoring our own transgressions.

Perhaps this is why we have a national crisis of addiction, from pills, to heroin, to alcohol, to sugar and compulsive eating.

In my own life, taking a fourth step inventory was the beginning of my own spiritual transformation. If I wanted recovery, I had to own up to the ways I had abused and controlled others and the times I was dishonest or deceitful (aka Confession). I had to, where practical, try to apologize and make amends to people I had harmed and learn to live differently (aka Repentance). It was utterly freeing and, like it was for Everyman, a joyful experience.

And then, like Everyman, I have found that service and love IN ACTION (aka Good Deeds) is critical for my ongoing recovery and spiritual health. It is not enough to just feel compassion or love, I must help others. Every day I ask myself, how can I be of service?