At one point in my life I believed evolution was a social as well as a physical phenomenon, that humankind was engaged in a never-ending march forward, and that someday the land of “Okie Dokie” would be the home of us all.  Okie Dokie land?  It’s an old-fashioned phrase known by many other names: Nirvana, paradise, the promised land, the land of your dreams.  I’m going with Okie Dokie — the place where everything is okay.

But after 70 years, I’m sorry to say, this land appears to be nothing more than a mirage.  Even more troubling, if we were ever able to find that land could we even live there — together? 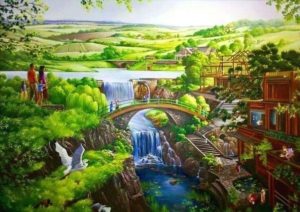 Or would we just heap misery on one another?

My grandfather left Ireland during a time when the land was being torn apart in civil strife.  He came to America in search of the land of Okie Dokie.  When he sailed into New York Harbor he thought he would be greeted by Lady Liberty and the words, “Give me your tired, your poor, your huddled masses yearning to breathe free, the wretched refuse of your teeming shore.  Send these, the homeless, tempest-tossed to me, I lift my lamp beside the golden door.”

Alas, he soon discovered that the land of Okie Dokie would be torn apart in two world wars and a calamitous depression.  People were suffering in America just as they had in Ireland. 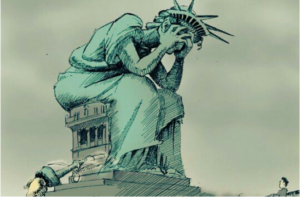 Who of us has not searched for the illusory land of Okie Dokie and then, when we thought we found it, suddenly and sadly learned we’d only discovered more suffering?

So what’s up?  Are we ever to find this place?

I remember a philosophy professor explaining the phenomenon this way.  He said the search for the land of Okie Dokie is as old as the existence of humankind.  The quest itself is built into our nature and is maybe best illustrated 2,500 years ago by a wealthy prince named Siddhartha.

Siddhartha was born into a privileged, pampered and protected home, raised by parents who believed Okie Dokie was his birthright.  Indeed, the prince’s father attempted to shield his son from all of life’s unpleasantries.  But for Siddhartha this world provided him no joy, only loneliness and suffering.  He got so unhappy that he devised a plan to sneak out of his castle and leave his old world behind in search of the real land of Okie Dokie.  But what he found was a world in a state of perpetual suffering.  He searched far and wide for the answer to the question of why this was so.  He finally concluded that Okie Dokie was not a place but a state of mind, and it could be found through understanding:

The good prince spent the rest of his life sharing what he’d learned.  He reminded everyone he encountered that the land of Okie Dokie was a state of mind, and that you get to that land by remembering that attachments bring suffering.  Always tell the truth, be nice to others, work hard and don’t steal, think good thoughts and look inward for answers.

So the exact location of the land of Okie Dokie can be found in the space between your ears.  It is the here and now. 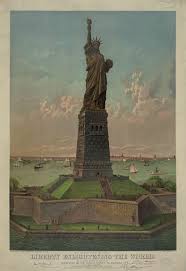 Okie Dokie is me.  I and the land are one.