“Surely he might call himself happier than most mortals, since so much of love’s bliss had filled all the hours of his existence. ~ Max Nordau, The Art of Growing Old 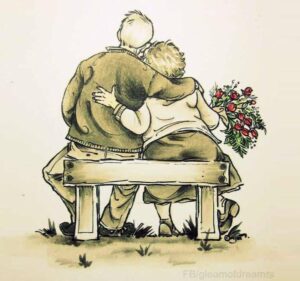 Haven’t we’ve all needed a tad bit more love in our lives after these lonely times of cloistered isolation? I came upon this sweet story, Canon in D with a Side of Tomato Soup, by Rachel Printy. Let me share it with you.

Paul stared at his wife across the table, noticing for the first time that her sweater was on inside out. Every morning he would lay out her clothes on the bed in a specific order, so she’d know which item to put on first. But it didn’t guarantee how Elaine would put on each piece. He’d have to pay more attention before they went out.

Their usual waitress, Sarah, appeared, holding a large tray with two sweet teas on it. “How y’all doin’ today?”

With Alzheimer’s disease, there were good days, and then there were challenging days. It was one of the latter. Elaine was preoccupied, scrubbing a stain on the wooden table with her finger, forgetting it was a permanent fixture of their booth. They’d been lunching at this diner once a week for years. That blemish had been there since day one.

“Today’s actually a very special day for us. It’s our fifty-seventh wedding anniversary.” His wife stopped fidgeting and looked up. “The day she took a chance on a broke, balding fellow by saying, ‘I do,’” he said with a wink in her direction.

“Congratulations, you two! Ms. Sue fixed up some of her key lime pie today and I’ll make sure y’all have a slice on the house before you go. Stickin’ with the Cobb salad and tomato soup?”

She nodded and turned, then swung back around. “I just remembered. We ran out of tomato soup about an hour ago. Chicken noodle ok?”

Paul looked at his wife, now scrubbing away at the stain with a napkin.

“Hmmm,” she said, again focused on the table.

“They’re out of the tomato soup. Do you want chicken noodle? Or a sandwich instead?” She looked confused, so he pointed to the menu and showed her a few other items he thought she’d enjoy, but she was having a hard time picking something new.

Suddenly she began to cry. “I want to go home. Please can we go home?” she begged.

“Honey, Sarah has already brought us our drinks. Don’t you think we should stay a little longer? I know you like tomato soup, but I’m sure their chicken noodle is delicious.”

That only made her cry harder. Sarah apologized on behalf of the restaurant for running out. Other customers glanced in their direction, wondering what all the commotion was about.

He sighed and reached back for his wallet, then placed a ten-dollar bill on the table.

Sarah gave him an understanding look and told him she’d bring the pie and some to-go cups of tea out to their car. He thanked her as he rose to help his wife out of the booth. He always tried to make their days as hiccup-free as possible, but sometimes, there just wasn’t any tomato soup.

Elaine stopped crying on the way home but appeared anxious, and kept asking him what day it was.

He hesitated to say the date, conjecturing that at least part of her current emotional state was because she hadn’t realized it was their anniversary. With her dementia he didn’t think a thing of it, but worried she might become upset with herself.

She furrowed her brow, a tell-tale sign she was struggling to grasp some distant memory or word.

When she asked what day it was for the third time during their twenty-minute drive, he gave in. “It’s Wednesday, January 7th.”

“That’s the day we got married!”

“Yes, it is,” he said, pulling up into their driveway.

He helped his wife sit on the living room couch before setting up two dinner trays and turning the TV to a re-run of The Price is Right.

“I’ll be right back to join you,” he reassured her.

Once in the kitchen, he walked past the cabinets labeled bowls/plates, mugs/glasses, and cereal to find the one with soup written on it. He’d marked them all to help her stay as independent as possible, especially since she loved to cook. In the past few months, however, he’d taken over the role as primary chef. Relief swept over him when he found some tomato soup in the back-right corner of the cabinet.

Conscious of his stiff, arthritic hands, he carefully lowered two bowls and filled them with the liquid contents before putting Elaine’s dish in the microwave. As he stood there watching the timer count down, the sound of Pachelbel floated into the kitchen.

His wife had been a music teacher, so they’d always had a piano in the living room. She hadn’t played much lately, though. He suspected it was because she now had difficulty sight-reading the music.

Walking back into the room, he found Elaine bent over the piano playing Canon in D from muscle memory. He was struck at how her fingers, still so capable and sure, glided over the keys. An image of her coming down the aisle towards him in a stunning white dress filled his head, those same lovely hands holding a bouquet of the yellow daisies he’d gathered for her from his garden. It had been a simple wedding, but that’s what they’d wanted.

He waited until she’d finished before taking a seat beside her on the bench. Bringing the back of her hand to his mouth, he planted a kiss as she beamed the same beautiful grin she had on their wedding day.

“My favorite song,” he whispered, choking up.

She gave his hand a gentle squeeze. “That’s why I played it for you.” Now it was his turn to cry.

“I can see that.” He nodded. “I love you so much. Now, how would you like to share some tomato soup with me?”

Her face fell a little. “I was hoping for chicken noodle, but that’ll do.”

“I’ve always loved you, and when you love someone, you love the whole person, just as he or she is, and not as you would like them to be.” ~ from Anna Karenina, by Leo Tolstoy 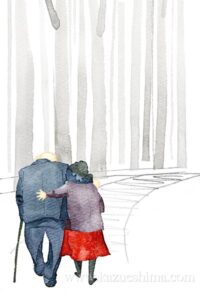 If you have an extra moment, listen along with me to Pachelbel’s Canon in D. Click here.