Where are the Good Men?  Charlie Brown has always been for me an illustration of goodness, a kind of compass that points to true north. 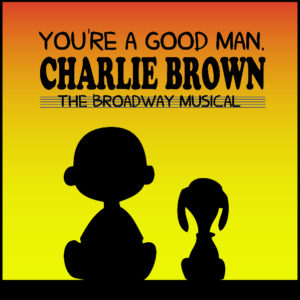 Before I got sober, I sometimes felt like Alice in Wonderland when she slipped down the rabbit hole: reality no longer mattered, truth had become fiction, good people were now bad, heroes now villains. 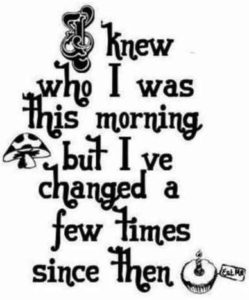 When I climbed out from my rabbit hole and rejoined the world the first thing I discovered was that I’d lost touch with my goodness.  I felt very much like a man torn inside out and living upside down. 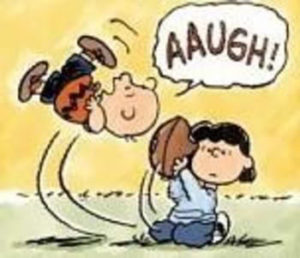 My life of appearances had come to a swift and conclusive end.  Life had to be lived on life’s terms and I could no longer make up the rules.  Like Charlie Brown, I had a hard time getting a toe on the football.

It was then I met a guy named Big Ed, a Longshoreman with 30 years of sobriety.  Ed chaired a first step meeting I attended when I first sobered up.  In his day he was a union enforcer, and a very tough guy.  I gathered from his stories he did some pretty bad things and had the rap sheet to prove it.

But Ed taught me a thing or two about character.  We came from different ends of the universe but I wanted what he had, something called “check book honesty,” a life that always added up.

There was nothing about Ed or his life that he was not prepared to share if he thought it would help someone else get through one more day.  It was from Ed I first heard “you’re only as sick as your secrets,” this at a time when my life felt like one long, endless secret.  Big Ed helped me to drop the mask of appearance and live with the guy I see in the mirror every day.  Ed would say it wasn’t that honesty is the best policy; it’s the only policy. 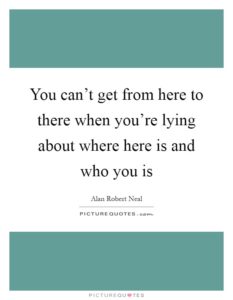 Shortly before he passed away in 1987 I had the opportunity to have lunch with Ed.  It seemed like life was kicking my ass up one side of the street and down the other.  I just didn’t feel I was making much progress in becoming a Charlie Brown kind a guy.  I had spent two years searching for myself and was coming up pretty much empty.

Ed had some simple advice:  “Pat, rather than go searching for yourself why don’t you let ‘yourself’ just find you?  This happens in the midst of you living your life.  In the meantime, why not find ways to be useful?  Why not reach out to newcomers in the group, become the coffee maker?  It’s what you do that matters, not what you say you do.”

All this from a guy with blood on his hands, who once terrorized the docks, and who people had considered a troublemaker.  Like Big Ed, “good men” are often graduates of the Charlie Brown School of Life. 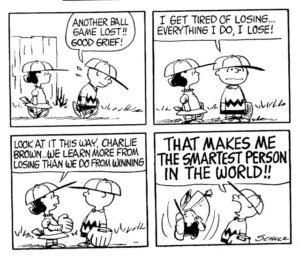