In his book on emotional intelligence Daniel Goleman recounts the story of a belligerent samurai who challenges a Zen master to explain the concept of heaven and hell.

“The monk replied to him with scorn, ‘You’re nothing but a lout – I can’t waste my time with the likes of you!’

“His very honor attacked, the samurai flew into a rage and, pulling his sword from its scabbard, yelled, ‘I could kill you for your impertinence.’

“Startled at seeing the truth in what the master pointed out about the fury that had him in its grip, the samurai calmed down, sheathed his sword, and bowed, thanking the monk for the insight.

Goleman says, “The sudden awakening of the samurai to his own agitated state illustrates the crucial difference between being caught up in a feeling and becoming aware that you are being swept away by it.” 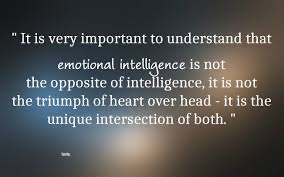 I was raised, like many of you, in a world without an understanding of emotional intelligence. Emotions were to be moderated, not understood. Intelligence came from the mind and knowledge from memorizing facts.

I lived half my life never seeing or saying the words “emotional” and “intelligence” in the same sentence. That is changing now. I, like the samurai, am having an awakening .

It started on an evening walk.

Marsha and I usually talk during our walks. In the midst of these conversations, she often asks me questions to get me to clarify something I’ve said. All too often I take offense at her questions and become outwardly annoyed and defensive. It can turn a perfectly enjoyable walk into an ordeal. Just like the samurai, I, too, don’t want to be continually swept away in agitation over a simple question. I feel like an adolescent, where innocent questions are experienced as accusations.

Scientists have studied the psychology of changing our behaviors and habits. It’s a compound process requiring a substantial commitment. Given the vast complexity of our emotional makeup, resetting our patterns ain’t easy.

But, like the samurai, I’ve humbled myself, sheathed my sword, and am working at becoming a better listener.

I’m making a conscious effort to listen with the sole intent of understanding, rather than listening with the intent of responding. I’m finding when I take the focus off of myself and put it on someone else, questions are no longer treated by me as accusations.

For me, the practice of listening seems to be improving my emotional intelligence.

My second story involves my grandson, Sam. The pandemic has raised questions for him:

In the wake of recent vaccinations, we had an indoor, masked visit with Sam and his family. It was the first in a long time. When they arrived Sam looked cautious and clung to his toy truck, “Wilson.”

When Sam got alone with Marsha, he told her, “Wilson’s feeling a bit shy.” Marsha asked if Sam wanted to help Wilson feel better. Sam hugged Wilson, kissed him, and said, “It’s okay, Wilson. Everything’s going to be okay.”

He then proceeded to introduce Wilson to his world at Grandma and Grandpa’s:

By the time the grand tour was finished Sam was beaming and ready to have fun. Marsha and Sam had communicated through his favorite truck and helped him to reestablish his connections in a way he could both hear and feel.

It was, for me, a master class in emotional intelligence.

I’m still learning “toddler speak” — the necessity of reading the same bedtime story over and over again, of having predictable routines, and the fact that four-year-olds have exacting memories.

In the realm of emotional intelligence, I’m counting on being able to teach an old dog (myself) new tricks. I’m up for it!