Perhaps in this upside down world of ours you’ve asked yourself this same angst-filled question. What drives us to act the way we do? 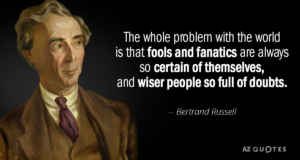 Well, one man offered up some intriguing answers.

In 1950 Bertrand Russell, who once famously said, “I’d never die for my beliefs because I might be wrong,” was awarded the Nobel Prize for literature. His acceptance speech attempted to answer the question of what drives human behavior. I don’t think it’s complete, and it certainly leaves out altruistic and noble motivations, but it’s thought-provoking, timeless, and calls for self-reflection.

In part, he said, “Man differs from other animals in one very important respect, and that is that he has some desires which can never be fully gratified….The boa constrictor, when he has had an adequate meal, goes to sleep, and does not wake until he needs another meal. Human beings, for the most part, are not like this; some desires are insatiable.”

Acquisitiveness:  “The  the wish to possess as much as possible of goods, or the title to goods, is a motive which, I suppose, has its origin in a combination of fear with the desire for necessaries. I once befriended two little girls from Estonia, who had narrowly escaped death from starvation in a famine. They lived in my family, and of course had plenty to eat. But they spent all their leisure visiting neighbouring farms and stealing potatoes, which they hoarded. Rockefeller, who in his infancy had experienced great poverty, spent his adult life in a similar manner. However much you may acquire, you will always wish to acquire more; satiety is a dream which will always elude you.”

Rivalry: “The world would be a happier place than it is if acquisitiveness were always stronger than rivalry. But in fact, a great many men will cheerfully face impoverishment if they can thereby secure complete ruin for their rivals.”

Vanity:  “Vanity is a motive of immense potency. Anyone who has much to do with children knows how they are constantly performing some antic, and saying ‘Look at me.’ ‘Look at me’ is one of the most fundamental desires of the human heart. It can take innumerable forms, from buffoonery to the pursuit of posthumous fame.”  It is scarcely possible to exaggerate the influence of vanity…throughout the range of human life, from the child of three to the potentate at whose frown the world trembles.”

Love of  Power:  “Love of power is closely akin to vanity, but it is not by any means the same thing. What vanity needs for its satisfaction is glory, and it is easy to have glory without power….Many people prefer glory to power, but on the whole these people have less effect upon the course of events than those who prefer power to glory….It is, indeed, by far the strongest motive in the lives of important men. Since power over human beings is shown in making them do what they would rather not do, the man who is actuated by love of power is more apt to inflict pain than to permit pleasure.” 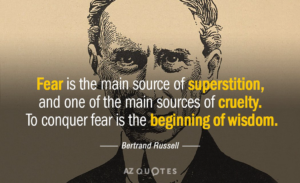 Finally, Russell’s speech looks Into the interplay of boredom and excitement — and war — with a whimsical fantasy:

”Experience shows that escape from boredom is one of the really powerful desires of almost all human beings….Our mental make-up is suited to a life of very severe physical labor. I used, when I was younger, to take my holidays walking. I would cover twenty-five miles a day, and when the evening came I had no need of anything to keep me from boredom, since the delight of sitting amply sufficed….The cure for bellicosity is, if the human race is to survive other means must be found for securing an innocent outlet for the unused physical energy that produces love of excitement….I think every big town should contain artificial waterfalls that people could descend in very fragile canoes, and they should contain bathing pools full of mechanical sharks. Any person found advocating war should be condemned to two hours a day with these ingenious monsters. I have never heard of a war that proceeded from dance halls.” 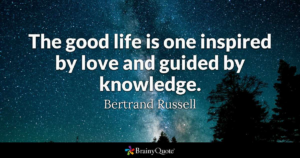 “Collective fear stimulates herd instinct, and tends to produce ferocity toward those who are not regarded as members of the herd.” ~ Bertrand Russell

Worth a look in the mirror, perhaps?