I’ve been thinking about The Wizard of Oz and the journey of Dorothy, the Scarecrow, the Tin Man, and the Lion. The Yellow Brick Road they traveled was no cakewalk. It was a strange and mysterious route filled with maddening twists and turns. Yet it was the route to getting what they wanted and needed in life, so it should come as no surprise the road was pock-marked with hard-won lessons, perhaps none greater than the importance of traveling with trusted companions. 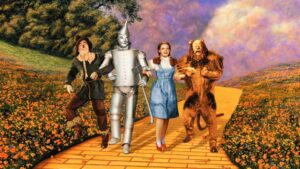 Here’s a story of how I survived a road of my own. It was 1992 and at the time I chaired a meeting on Monday nights. One night, two young men from New Hampshire showed up in really tough shape after a Labor Day binge. They were desperate for help, in need of a sponsor, and reached out to me.

Part of my 12-step work with them involved meetings high in the mountains requiring long uphill hikes. At these meeting were other sober people who thrived in the natural settings and the rigors of mountain climbing. 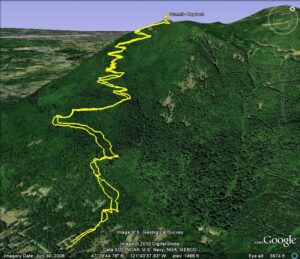 One time we decided to do an eight-mile hike to the summit of Mount Si. We arrived at the trailhead early and found that we were alone on the path. After about two hours we suddenly realized we had run out of trail. Somehow we had veered off course deep into uncharted territory.

We assessed our situation, reckoned we were about halfway up, and decided to bushwhack to the summit. It was an exhausting hike on rugged terrain. The foliage was deep and we had brought no provisions. When we finally reached what we thought was the summit we were tired, hungry, thirsty and, as it turned out, lost. We had not reached the summit, only a ridge to the east.

We were in big trouble. The hour was late, it was cold, and storm clouds were forming. We had to get down the mountain fast. The question was, how?

Although Mount Si is well-traveled it’s not without danger. The mountain is encircled by cliffs and there are only a few routes that permit a safe descent. Many a lost hiker has perished on the mountain. A safe descent REQUIRED we work together as a team.

One thing about the Yellow Brick Road is you learn to succeed as a team where you would surely fail alone. We can do things I can’t do.

So the three of focused exclusively on how we would get off the mountain. Someone remembered when lost in the wilderness to look for a stream to guide you down the mountain. So off we went in search of a stream. We soon came upon one and followed it down, bushwhacking all the way.

After about an hour, as we neared a waterfall, one of my teammates screamed at the top of his voice,  “Pat, move right! Move right!” Sure enough, just as I did I felt the wind from a huge boulder whiz right by my head. My life had surely been saved. My teammates were looking after me.

We followed the stream down the mountain and with some tricky cliff descents, after more than 10 hours, we reached the bottom safely. We had successfully navigated the Yellow Brick Road! As we talked, we realized we had each found what we were looking for. We learned, as so many others have learned, that the effort you put into life becomes the meaning of life itself.

The effort Dorothy, the Scarecrow, the Tin Man and the Lion exerted on their journey down the Yellow Brick Road became the fulfillment of their deepest longings. The three of us were equally blessed. We discovered the key to keeping ourselves sober was in keeping a keen eye on service to one another.

You keep what you give away.