As an early member of the Baby Boomer generation, I took pride in dreaming big.  I was preoccupied with a yet unborn future and found it easy to escape into the dream world of my longings.

I remember Robert Kennedy sharing these words from George Bernard Shaw at a rally at the University of Washington six weeks before his assassination: “You see things; and you say, ‘Why?’ But I dream things that never were; and I say, ‘Why not?’”   I fancied myself as a “why not’?” kind of guy and therefore spent much of my youth living in the future tense.  Gratitude in the moment was not something I practiced. 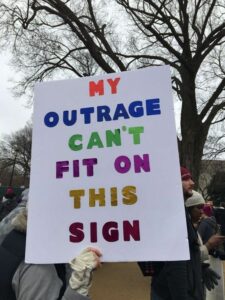 Omar Khayyám wrote, “Your hand can seize today, but not tomorrow; and thoughts of your tomorrow are nothing but desire. Don’t waste this breath, if your heart isn’t crazy, since ‘the rest of your life’ won’t last forever.”

I discovered this truth from a homeless man at a meeting I attended in Pioneer Square.  At that time my gratitude was in short supply.  I was more prone to shake my fist at the universe and squeal about how life wasn’t fair.  So when this homeless man who lived under the old viaduct held forth on his gratitude, it got my attention.  He recounted joyfully how sobriety had given him a new pair of glasses to see the world, and with it a new perspective on things of value: the roof over his head (concrete viaduct), the food he ate (from the food pantry), his friends and neighbors (homeless community).  He wanted nothing more than to share with us his abundance.

The contrast with my own state was palpable.  Here was a homeless man who truly lived in a golden house, and as the story goes…

…A little girl lived in a small, very simple, poor house on a hill and as she grew she would play in the small garden and as she grew she was able to see over the garden fence and across the valley to a wonderful house high on the hill – and this house had golden windows, so golden and shining that the little girl would dream of how magic it would be to grow up and live in a house with golden windows instead of an ordinary house like hers.

And although she loved her parents and her family, she yearned to live in such a golden house and dreamed all day about how wonderful and exciting it must feel to live there.

When she got to an age where she gained enough skill and sensibility to go outside her garden fence, she asked her mother is she could go for a bike ride outside the gate and down the lane. After pleading with her, her mother finally allowed her to go, insisting that she kept close to the house and didn’t wander too far. The day was beautiful and the little girl knew exactly where she was heading! Down the lane and across the valley, she rode her bike until she got to the gate of the golden house across on the other hill.

As she dismounted her bike and lent it against the gate post, she focused on the path that leads to the house and then on the house itself…and was so disappointed as she realised all the windows were plain and rather dirty, reflecting nothing other than the sad neglect of the house that stood derelict.

So sad she didn’t go any further and turned, heart broken as she remounted her bike … As she glanced up she saw a sight to amaze her…there across the way on her side of the valley was a little house and its windows glistened golden …as the sun shone on her little home.

She realised that she had been living in her golden house and all the love and care she found there was what made her home the ‘golden house’.  Everything she dreamed was right there in front of her nose. ~ Ballard MacDonald

I am learning that there are always things right in front of my nose upon which I can focus my gratitude.  My relationship with my wife, my service at the jail, my weekly service at the AA office, holding my grandson on my lap, my longtime friends, gazing out on Puget Sound — these are just a few of the things for which I am tremendously grateful.  All I have to do is notice and let them penetrate my heart.