A new guy recently showed up at our Snohomish County Jail meeting.  He looked in pretty rough shape and toward the end of the meeting I asked him if he’d like to share.  “Sure,” he said.  He began by standing up, lifting his shirt, and letting us all examine the three huge bullet scars on either side of his spine.

He then sat down and told us his story.  He had 12 years of sobriety when he got the hews that his wife, business partner, and mother of his four children, had terminal cancer.  When she passed he went on a resentment-laced, defiant rampage, blaming God for snatching away his wife from him and his children.  To get even he flew to Las Vegas and commenced with a months-long, meth-fueled binge with a woman he met.  It ended with someone dying in an armed robbery.  A high-speed chase ensued across two counties, involving 50 patrol cars.

When the entire saga was over he’d lost everything — his business, his children, and then, for a moment, his life.  He was shot 10 times and woke up, after having been pronounced dead, in the county morgue.  You read me right, he woke up in the morgue just as he was about to have his organs harvested and become a footnote of history in the Skagit Valley Coroner’s report.

But he came back to life.

He ended this strange and terrifying story by announcing that he was searching for God.  He no sooner finished telling his tale than a guard came in to walk the men back to their cells.

We were all left with this powerful story of hitting bottom that ended with the question of how to find God.  In all my days of pondering what I believed to be my sincere desire to know God, I never experienced the question raised as poignantly, desperately, and longingly as I did by that inmate.  Moreover, I never felt more inadequate in providing even a hint of an answer. 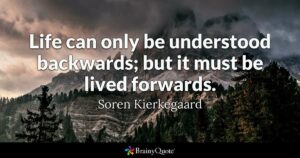 How do we know what to attribute to God?

There once was a wise old farmer.

A farmer and his son had a beloved horse who helped the family earn a living. One day, the horse ran away and their neighbors exclaimed, “Your horse ran away, what terrible luck!” The farmer replied,

A few days later, the horse returned home, leading a few wild horses back to the farm as well. The neighbors shouted out, “Your horse has returned, and brought several horses home with him. What great luck!” The farmer replied,

Later that week, the farmer’s son was trying to break one of the horses and she threw him to the ground, breaking his leg. The neighbors cried, “Your son broke his leg, what terrible luck!” The farmer replied,

A few weeks later, soldiers from the national army marched through town, recruiting all boys for the army. They did not take the farmer’s son, because he had a broken leg. The neighbors shouted, “Your boy is spared, what tremendous luck!” To which the farmer replied,

“Maybe so, maybe not.”  — Author unknown

I thought about this tale and the plight of the inmate who was in search of God.  We left the stunned, bullet-ridden inmate thinking, “You’re still alive!  What tremendous luck!”  I imagine the wise old farmer speaking back to us.

O God, Where Art Thou?

Perhaps the answer is within us, with our intention to live our days in alignment with a higher good. 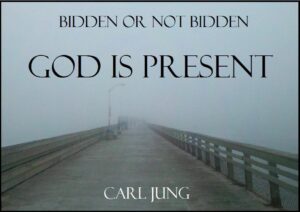