A friend of mine shared this story with me on how he found success.  His company offered him a promotion to a new job that consolidated two positions into one.  The job, among others things, involved managing a difficult product line with a number of moving parts, all in an environment over which had little control.  Six months of the year he would be on call 24/7.

He found himself in a dilemma.

As I listened to him describe what he saw, it was clear he’d not been seduced by either the money nor flattered by the recognition.  He remained unapologetically focused on his number one priority: his family.  He explained to me he needed to understand first the consequences of saying yes.

He had already learned through experience to rein in the bugaboo of opportunism.  He was not about to gamble the future of his family on an opportunity that might well consume him and his loved ones. He had learned to kick the tires before buying and to analyze opportunities from the inside out  He knew what he wanted but, more importantly, what he didn’t want.  It was the value the opportunity brought to his life, not simply his bank account. 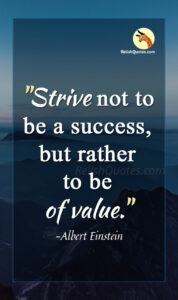 He and his wife had established their own definition of success.  They concluded this was not a job that would enhance his life in ways that mattered to him and his family.  He graciously and with humility declined the promotion.   His family came first.

My friend used a wide angle lens not a microscope to examine the opportunity and, like the  seeker in the fable that follows, found the answer for which he was looking.

…After years of searching, the seeker was told to go to a cave, in which he would find a well. “Ask the well what is truth,” he was advised, “and the well will reveal it to you.” Having found the well, the seeker asked that most fundamental question. And from the depths came the answer, “Go to the village crossroad: there you shall find what you are seeking.”

Full of hope and anticipation the man ran to the crossroad to find only three rather uninteresting shops.  One shop was selling pieces of metal, another sold wood, and thin wires were for sale in the third.  Nothing and no one there seemed to have much to do with the revelation of truth.

Disappointed, the seeker returned to the well to demand an explanation, but he was told, “You will understand in the future.'”When the man protested, all he got in return were the echoes of his own shouts.

Indignant for having been made a fool of – or so he thought at the time – the seeker continued his wanderings in search of truth.  As the years went by, the memory of his experience at the well gradually faded until one night, while he was walking in the moonlight, the sound of sitar music caught his attention.  It was wonderful music and it was played with great mastery and inspiration.  Profoundly moved, the truth seeker felt drawn towards the player.  He looked at the fingers dancing over the strings.  He became aware of the sitar itself.

And then suddenly he exploded in a cry of joyous recognition: the sitar was made out of wires and pieces of metal and wood just like those he had once seen in the three stores and had thought it to be without any particular significance.

At last he understood the message of the well: we have already been given everything we need: our task is to assemble and use it in the appropriate way. Nothing is meaningful so long as we perceive only separate fragments. But as soon as the fragments come together into a synthesis, a new entity emerges whose nature we could not have foreseen by considering the fragments alone.

Sometimes in discovering what doesn’t fit we discover what does. 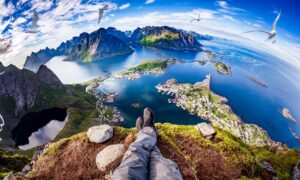