“Human life, old and young, takes place between hope and remembrance. The young man sees all the gates to his desires open, and the old man remembers his hopes.” ~ Franz Grillparzer

I heard it said as you grow older you will find you have two hands: one for helping yourself, the other for helping others. It can take many years to learn how to use that helping hand. 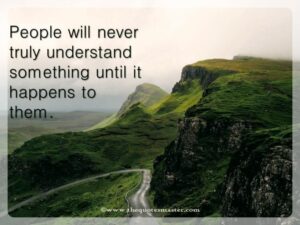 I came upon a story of how one boy learned:

Once upon a time, in a small village, lived a young, athletic boy. He was a very good runner. The boy was very hungry for success and for him winning was everything.

One day, the boy participated in a running competition held in the village. He was to compete with two other boys. A large crowd had gathered to witness the event. The race commenced and he came in first.

A wise old man, upon hearing of the boy, had traveled far to see him run. The crowd was ecstatic and cheered for the boy. The boy felt proud and important. The wise man, however, remained still and calm, expressing no sentiment.

Later, in a second race, the boy finished first again, and again the crowd erupted in cheers. The boy felt even more proud and important. The wise man remained still and calm, again expressing no sentiment.

Seeing this, the wise old man stepped forward and presented the boy with two new challengers: a frail, elderly woman and a blind man. “What’s this?” quizzed the boy. The wise old man simply replied, “Race.”

The boy ran ahead and was the only one to finish the race. The two challengers had been left standing at the starting line. The boy was ecstatic with his victory, but to his surprise no one was cheering, just looking at him silently, showing no sentiment.

“What happened?” He asked. “Why is the crowd not cheering for me?” The wise old man pulled the boy aside and said, “Race again, but this time finish together. All three of you must finish together.”

So the boy collected himself, found his place between the frail old woman and the blind man, took both their hands, and ever so slowly began to make his way to the finish line.

When the three of them crossed the line together the crowd erupted in the loudest applause of the day. They gathered around and congratulated the three of them. The boy was aware something very special had just taken place but not sure what it was.

The wise old man smiled, gently nodding his head. He looked into the boy’s eyes, placing his hands on his shoulders and said, “Young man, the applause you hear now is for how you finished the race, hand in hand with a frail old woman and a blind man.”

This story came together for me in technicolor at a recent high school reunion Marsha and I attended with our friends, Tucker and Mimi McHugh.

Tucker and I were members of the all male Seattle Prep class of ‘67.

The brunch was held in the school gymnasium in which a solid wall of banners hung as a testimony to the perennial athletic power that has been Seattle Prep throughout its 130-year history.

What made this scene so weird was the juxtaposition of all the banners surrounding a group of frail old men.

And yet, strange as it seemed, these men, some of whom had trouble walking from the parking lot to the gym, were the very same men responsible for so many of those banners.

It dawned on me this Race Called Life is a different kind of race, run in different stages through a lifetime.

As young people the race is a solitary affair, our eyes focused on winning, often not noticing those who need help. We forget it’s only a matter of time before we are those people, the frail old woman and the blind man who need help finding the finish line.

The Race Called Life begins when we’re born and ends when we die. My Prep classmates reminded me, now that we’ve grown old the race is not over until the last of us reaches the finish line.

And as all champions know, at the end, we need to help each other across.