What do you do when your life’s been turned upside down? 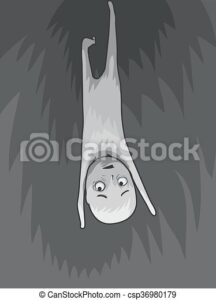 Such was the case for me when Marsha and I left Chicago to resettle in the Pacific Northwest.

I thought moving back would be cakewalk — wasn’t I just coming home? Apparently not.

The years I lived in Chicago had changed me. I first came to Chicago as a 21-year-old scrub-faced kid and I was returning as a guy who’d been molded by that city, having lived there off and on for a total of 37 years. We had lived five train stops from Wrigley Field. Over time, I had taken on some of the personality of the Windy City and become a Chicagoan.

Consequently, when we landed back in the Pacific Northwest I felt like a fish out water, and that water wasn’t Puget Sound, but Lake Michigan. Some things were different than I had remembered them,  but mostly I just felt a bit like a foreigner.

Who was Pat Moriarty ? 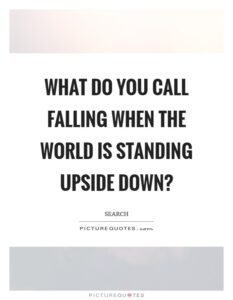 This got me thinking of family and friends whose lives had been upended in ways far more difficult than mine:

How do you get through things like this? To find an answer I reached out to my old friend, Kieran O’Mahony, who righted himself, literally, in the most desperate of conditions.

Kieran was an accomplished climber who found solace in scaling difficult mountain peaks. To celebrate his 50th birthday he decided to climb Mt. Kenya. 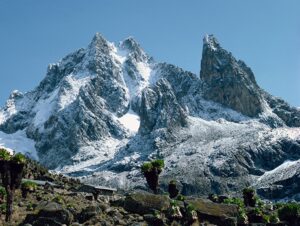 When he arrived after a long hike at the base of the mountain, he knew he had to summit quickly as he had only a limited amount of daylight to complete the climb. He had packed no overnight gear. The climb went smoothly and he reached the summit right on schedule. The descent? Well, that was another matter.

”Getting to the top is optional. Getting down is mandatory.”  ― Ed Viesturs

On the repel down he ran into trouble with his equipment. On one particularly difficult maneuver a cable snapped, suddenly catapulting him upside down so he was hanging off the side of the mountain. With his 60-pound pack there was no way to right himself while dangling 3,000 feet above the valley floor. 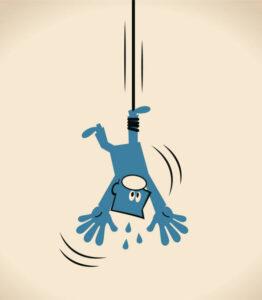 Fear surged through him as he took in the full weight of his situation. There was every possibility he would die on Mt. Kenya that night. He recognized his real problem was not that he was upside down on his rope, it was that he was terrified upside down on his rope. There was no one there to save him; if he was to be saved he’d have to save himself.

He understood he was doomed unless he could take hold of his fear.

So he engaged in a set of practices to quiet himself. He closed his eyes, controlled his breathing and gently allowed himself to sway back and forth on the rope, imagining himself in a peaceful, restful place.

Soon he felt his body calm and as he opened his eyes and trained them on the rock wall in front of him he began to see the outline of an object attached to the rock face. As he swung closer he recognized it was an old harness clamp left from a previous expedition.

Exactly what he needed!

He maneuvered himself over to the wall, grasped the clamp and tied himself on.

He then was able to flip himself right side up, repair his equipment, and safely repel the rest of the way down the mountain.

Kieran’s riveting story is a just reminder that getting turned upside down is never the end of the story. It is when we stop fearing being thrown upside down that we can see the next steps to right our life.

For me that meant that I stop swinging between two parts of the country and attach myself wholeheartedly to my new home.

When I accomplished that my upside-down world turned right side up. 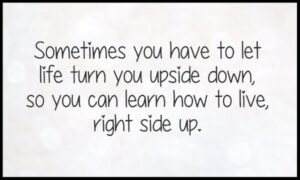