I find my thoughts, recently, turning to Abraham Lincoln as he guided a broken country through the Civil War. 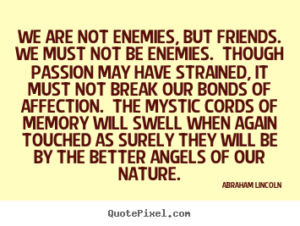 There are so many Lincoln stories, some humorous, some poignant. The ones I’ve been reading illustrate Lincoln’s great capacity for compassion, forgiveness and empathy.

Many people sought the President’s help. Few were as fortunate as Thomas Bullock, who recalled how he obtained a pardon for his wounded Confederate brother:

Closing the door quietly behind him, he drew the largest of the easy-chairs to one side of the glowing log fire, and sitting down, leaned his elbow on the arm toward me, and said, “Now, my son, what can I do for you?”

I said: “Mr. President, I have come to ask you to parole my brother, Lieutenant Waller R. Bullock, from Johnson’s Island, where he is sick and wounded. He is extremely ill, and I want you to release him so that he may be brought home to die.”

I knew what he would ask me the first thing, and my heart sank as I heard the fateful question put.

“Will your brother take the oath [of allegiance to the Union]?” said Mr. Lincoln. “No, sir; he will not,” I replied. “He will have to die in prison if that is the only alternative.”

“I cannot parole him,” said the President.

I replied: “Mr. Lincoln, my brother is very ill, and cannot live long in his present condition; and it would be a great comfort to our invalid mother to have him brought home so that he can be tenderly nursed until he dies.”

“My son,” said Mr. Lincoln, “I should like to grant your request, but I cannot do it. You don’t know what a pressure is brought to bear upon me in such matters.”

Though somewhat disheartened, I again repeated the story of my brother’s extreme illness… I said: “Mr. Lincoln, you are the only person in the United States that can do absolutely as you please.”

The President, after a long period of meditation, he straightened himself to his height, he brought his clenched hand down upon the desk with a bang, and said, as he looked me full in the face, “I’ll do it; I’ll do it!”

Walking over to his desk, he picked up a small paper card case and shook it to see if there were any cards left. I could distinctly hear the rattle of a single card.

Finding what he was looking for, the President sat down, and placing the card before him, wrote very slowly and deliberately. He read it aloud to me as follows:

“Allow Lieut. Waller R. Bullock to be paroled and go to his mother in Baltimore, and remain there until well enough to be exchanged.”

“You shall have your brother,” he said. “Take him from the ranks of rebellion and give him to a loyal mother is a better investment for this government than to give him up to his enemies.” 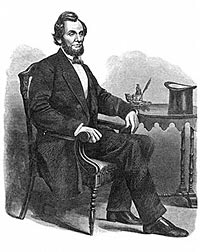 The second story, as recounted by Lincoln’s personal secretary, involves a young Union soldier with a strange request.

…Lincoln read a letter the boy had given him looks up and says, “Son, it says here you want to be a captain?”

“And what do you want to be captain of? Have you got a company?”

“No, sir, but my commanding officers told me that I could get a captain’s commission if I were to present my case to you.”

“And so I could, but to be a captain you should have a company or something to be captain of. You know a man is not a husband until he gets a wife – neither is a woman a wife until she gets a husband.

“I might give you a commission as captain and send you back to the Army of the Potomac, where you would have nothing to be captain of, and you would be like a loose horse down there with nothing to do and no one having any use for you.”

The boy began breaking, tears in his eyes.

The President put a hand on the boy’s shoulder, patting while he spoke: “My son, go back to the army, continue to do your duty and you will not have to ask for promotion — it will seek you.

“Shake hands with me, son.” The boy then stepped away as if he had been home to see a wise and kindly father.

Don’t we all ache for such kindness now?