We live in a time reminiscent of Lewis Carroll’s stories of the distorted world visited by Alice in Alice’s Adventures in Wonderland and Through the Looking Glass. 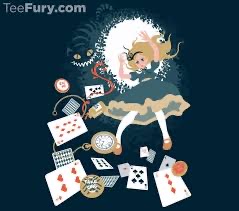 In that world Alice was captive to a screwball place of lies, distortions, and made-up reality.

When I was about the age of Alice, Walt Disney produced a TV special about these tales and I remember, at the time, how frightening it was and how grateful I was it was just a fictional place.

But now I’ve been frightened all over again. Today’s world seems to be mimicking Wonderland and a whole generation is coming of age in an altered reality where one person’s up is another person’s down, someone’s right is someone else’s wrong. Truth, we’re told, is a matter of opinion.

“It would be nice if something made sense for a change.”

“Why, sometimes I’ve believed as many as six impossible things before breakfast.”

One question that hangs in the air is what happens to a generation coming of age during a time of disillusionment?

It leaves me feeling as cracked open as Humpty Dumpty.

But once I am cracked open I become aware of the world beyond Wonderland, on the other side of the Looking Glass.

“The truth is something that burns. It burns off dead wood. And people don’t like having the dead wood burnt off, often because they’re 95 percent dead wood”. ~ Jordan Peterson

It was June 18, 1972 and I was in Washington DC with my friend, Neil Vance. Neil had been a Peace Corps volunteer and Kennedy fellow and I was a scrub-faced 23 year old just out of college.

The lead story in the Washington Post that morning read:

“Five men, one of whom said he is a former employee of the Central Intelligence Agency, were arrested at 2:30 a.m. yesterday in what authorities described as an elaborate plot to bug the offices of the Democratic National Committee here.”

What followed were two years of Watergate investigations and hearings, and a clear view through the looking glass into the seedy world of political corruption.

It set off my own age of discontent. When Nixon waved goodbye from his helicopter perched on the White House lawn, I waved back from a bar stool with a drink perched in my hand, steeped in my newly minted cynicism. My journey into Wonderland and disillusionment ultimately led to my becoming lost in a vodka bottle.

When I finally found sobriety and made peace with the world and myself I rediscovered my idealism, this time borne not out of certainty, but of a more clear-eyed view of all the shades of gray, and a greater acceptance that darkness is part of all of us. 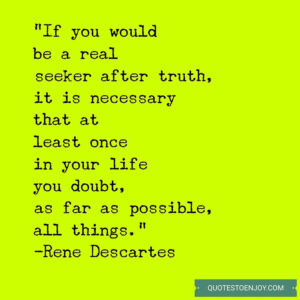 I once again became a seeker of truth and much less fearful of the truth I’d find in a world I knew to be broken. I had passed through disillusionment and into what might be described as faith.

“Truth, like milk, arrives in the dark. But even so, wise dogs don’t bark. Only mongrels make it hard for the milkman to come up the yard.“  — Christopher Marley

I say to those coming of age in this moment:

For one day you’ll surely to return to them.

Remember most of all:

“Those who have failed to work towards the truth have missed the purpose of living.” — Buddha Siddhartha Guatama Shakyamuni