“It is a wise father that knows his own child.” ~ William Shakespeare

On Father’s Day I’m delighted to share a post from Joe Nagy. When Joe’s son, Nate, was in college, Joe wrote him a “Thought For the Week,” each week. What a gift that must have been to Nate — and to Joe. He shares one of these thoughts with us today. Happy Father’s Day!

In November 2007 my wife and I visited our son Nate in New York City at the start of his second year of college. We went to the Metropolitan Museum of Art for the afternoon, and Nate took a liking to Rembrandt’s painting titled “Aristotle Contemplating the Bust of Homer.” Afterwards he bought a poster of the painting in the gift shop. Here’s what I wrote to him afterwards: 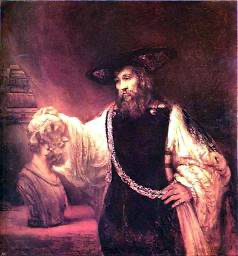 Here’s why I like Rembrandt’s painting of Aristotle Contemplating the Bust of Homer.

The museum’s note describing the painting suggested that Rembrandt was creating an allegory, Aristotle standing for Reason, Homer for Honor.  Reason is pondering Honor, with a look of concern, perhaps of longing, perhaps tinged with regret.

Why honor? Tradition tells us that Homer was a blind poet composing some 250-300 years before Aristotle’s time. We know very little about him. We don’t know where he lived or what he looked like. Yet the Greeks of 5th Century B.C. considered the Iliad and Odyssey to be the highest expression of Greek culture –  they defined what it meant to be a person of honor and courage.

Why reason? Aristotle lived in Athens after the fall – Athenians through pride and arrogance entered into a devastating war with Sparta and lost. However, Athens was still the school of Hellas, and Aristotle above all others was the schoolmaster. He defined the academic disciplines that we still follow today, and he categorized and described everything that was knowable.

The historian David McCullough reminds us that the people we study in history did not live in the past. They lived in the present, their present. Aristotle’s time was present time, and it was full of conflict, uncertainty, and danger. Aristotle probably looked at the Athens of his day and thought that they had lost something valuable when they achieved power and glory. He might have looked back 300 years to Homer as we look back to George Washington, Alexander Hamilton, and John Adams. He might have wondered what all this wealth and knowledge had brought, if in the process Athenians had lost their core values.

The genius of Rembrandt’s painting, to me, is that he performs a trick that only art can do. Rembrandt catapults Aristotle into the present – Rembrandt’s present.  He depicts him as a wealthy, influential Dutchman of his day – someone very much like the people whose portraits Rembrandt regularly painted. Holland in the 17th century was a trading giant and prosperous beyond all other nations of the time. Perhaps Rembrandt was contemplating what the Dutch had lost when they achieved great wealth. He must have seen at close range the lives of the rich and famous who were so eager to hire him. He recorded the faces of the Jeff Bezos’s and Donald Trumps of his time, and perhaps he didn’t like what he saw.

And so he draped his Aristotle in the robes and gold chains of a newly rich Dutchman, and had him ponder the bust of a blind, poor, unknown poet whose face we will never know, but whose works will last for all time.

Perhaps Rembrandt was reminding those whose portraits he painted: I can record your image for future generations, but they will judge you by your actions. Choose wisely.