These days I’ve been feeling a little weary and needing to get outside of my own head. I asked Marsha where she turned for inspiration and she said music always had been an important source for her. She loved all kinds of music, and mentioned that she had gone through an intense Beethoven phase when she was a teenager. 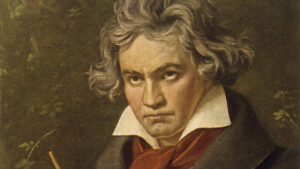 Her response reminded me of music’s extraordinary ability to lift the human spirit. Certainly, few compositions have done so as majestically as Beethoven’s monumental Ninth Symphony.

So at a time when many of you might be feeling uninspired let’s journey back in time to the Theater am Kärntnertor in Vienna. The date is May 7, 1824, opening night for Beethoven’s Ninth Symphony.

Beethoven had composed the symphony while living in Vienna during a time when Europe was in a state of reactionary convulsion following the Napoleonic Wars.  The Congress of Vienna had empowered Metternich and other European statesmen to reestablish the old order and, as a result, a repressive darkness descended upon the continent.

Mounting the symphony had been a massive undertaking. The movements were longer, with more complex arrangements requiring a large orchestra. It included vocal soloists and a chorus with scores that were enormously challenging to sing.

On opening night the theater was crackling with excitement. The audience seemed to anticipate that something astounding was about to take place. Beethoven had been losing his hearing over the years. By the time he composed his masterpiece Ninth Symphony he was completely deaf.

But when the curtain rose, there he was, on stage. One musician observed:

”He stood in front of the conductor’s stand and threw himself back and forth like a madman. At one moment he stretched to his full height, at the next he crouched down to the floor. He flailed about with his hands and feet as though he wanted to play all the instruments and sing all the chorus parts.” 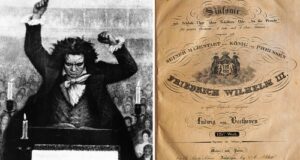 The final movement of the symphony, Schiller’s Ode to Joy, is a searingly optimistic finale to end all finales. Its triumphant message of universal brotherhood bursts forth, claiming a promise of peace and freedom for all humanity.

Beethoven’s deafness created one of the most touching stories in music. When the symphony was completed, he remained facing the orchestra, unable to hear the thunderous applause of the audience. Caroline Unger, the mezzo-soprano soloist, had to tap the deaf composer’s arm and have him turn around so that he could see the crowd’s response. Many of those in attendance, including Miss Unger, had tears in their eyes when they realized the extent of Beethoven’s deafness.

The Ninth Symphony was received as a monumental achievement of the human spirit, a journey from darkness to light, from minor to major, and from chaos to order. The symphony spoke back to the darkness of the times with a musical fury that became an anthem for all souls hungry for freedom.

In 1972 the Ode to Joy was adopted by the Council of Europe as its anthem, and again in 1985 by the European Union which states on its official website:

“In the universal language of music, this anthem expresses the European ideals of freedom, peace and solidarity.”

The historian Harvey Sachs said of Beethoven, “His music spoke of a quest for freedom: political freedom, from the repressive conditions that then dominated Europe, and freedom of expression, certainly, but above all freedom of the mind and spirit.” One composer described it like an eclipse: “It’s when the shadow of the moon passes over the sun for one brief moment. Everything and everybody becomes merged into a singular force.”

Today you may be feeling low and beaten down and not the least bit triumphant, wondering how you will endure another week of — all this. Remember what one deaf man discovered when he listened to the music that resided in the depths of his soul. It makes you wonder what we’d find if we listened to our own souls for inspiration.

I invite you to listen to this Japanese chorus of 10,000 perform the Ode to Joy. Click here.