“I do not know what I may appear to the world, but to myself I seem to have been only a boy playing on the seashore, and diverting myself in now and then finding a smoother pebble or a prettier shell than ordinary, whilst the great ocean of truth lay undiscovered before me.” — Issac Newton

I’ve been reading up on past pandemics that were as unraveling in their times as ours is now. A couple of things struck me. First, to survive a pandemic social distancing is the rule, and second, after a pandemic life is never the same. Because of their disruptive nature, pandemics necessarily create change. 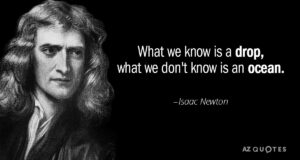 The story of Isaac Newton is a powerful illustration of this.

The year was 1666 and the bubonic plague was raging through England, killing one quarter of the country’s population. Newton was a student at Cambridge University when an order was given by the school for the students to return home and shelter in place. He went to his home in Grantham, constructed a one room study, and spent the next year alone, intent on finding answers to a boatload of questions.

And my, oh my, what answers he found.

Newton filled his days and nights with rigorous study. He had copies of texts by the major Greek and Islamic mathematicians. He absorbed all there was to know about the mathematics and physics of his time, and went on to fill three one-thousand-page notebooks with his thoughts, theories and conclusions. He then pushed beyond, far beyond, and uncovered hitherto unknown workings of the natural world. When the existing algebraic concepts proved insufficient, he invented calculus to better understand what he was discovering.

He began the year residing in one intellectual universe and ended in an entirely different one. That year transfigured young Issac from a precocious student to the world’s foremost mathematician and physicist.

His method was simple. He focused all his attention on his questions about the world imploding around him, obsessively and patiently pursuing them until they gave up their answers. “I keep the subject of my inquiry constantly before me, and wait till the first dawning opens gradually, by little and little, into a full and clear light.” 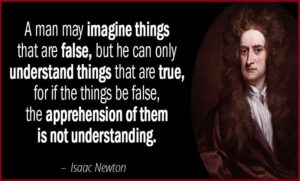 When Newton entered his study in 1666 it was not to hide but to prepare; rather than lean into his fears he leaned into his questions.

Twenty years later, in 1687, he would share what he discovered while sheltering in place in the Principia — Mathematical Principles of Natural Philosophy, which marked the beginning of a revolutionary epoch in physics. Newton’s work ignited a scientific revolution and brought to fruition the work of Copernicus, Kepler, Descartes and Galileo. He tore down the cosmology of the Aristotelian universe and replaced it with his own.

All this happened because he wasn’t afraid to seek answers to really difficult questions.

Now, I get that when most of us get up in the morning and look in the mirror we don’t see Issac Newton staring back. But my guess is that Issac Newton didn’t either. All he saw was a young man with a lot of questions.

Perhaps the lesson from Newton’s story is no more complicated than using this time to grapple with the hard questions in our own lives, tackling what we had thought was too difficult. Newton’s observation is a good one: that if we patiently pursue our questions, in time answers will come. I have no doubt that at this very moment there are young (and middle-aged, and old) Newtons sheltering in place, figuring out how to understand things differently, to do things differently, re-evaluating what is really important, working to become more of who they really want to be, leaning in to difficult questions.

History teaches us, painful as it is, the unraveling will end and yet unknown things will be revealed. May we all be Newtons now. 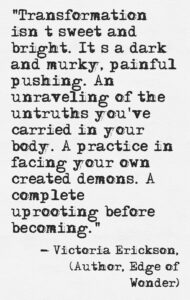