When Marsha and I take our evening walk we pass a statue of the late Henry M. (Scoop) Jackson.  He was a renowned United States Senator from the state of Washington, an Everett native, and regarded by some as one of our country’s great leaders.  It was said he never forgot a name, never forgot where he came from, and was Jack Kennedy’s first choice for Vice President.  His memorial is in a park across the street from where he lived. 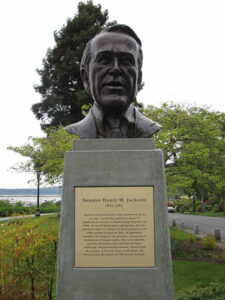 But my thought is not on a great senator; my thought is on his equally great shadow.  Jackson arrived in Washington as a freshman congressman in the spring of 1942 during the early days of America’s involvement in the Second World War.  President Roosevelt had just issued Executive Order 9066, authorizing the internment of Japanese Americans.  The newly elected congressman was a big supporter of the order.

The order itself was based on a false, brutal assumption that Japanese Americans, because of their ethnicity, were not aligned with the Allied war effort and, given the opportunity, would betray their country.  They were therefore interned in resettlement camps for the duration of the war. 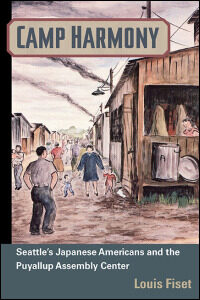 My mother at the time was a senior administrator for the agency responsible for Camp Harmony, the embarkation center located in Puyallup, Washington, where the internees would be sent before being permanently resettled at camps located Minidoka, Idaho; Tule Lake, California; and Heart Mountain, Wyoming.  The young congressman was a frequent visitor to Camp Harmony as his committee had oversight responsibility for the Internment Order.  It was in this capacity the young and single congressman became friends with the young, single (and pretty) Theresa McCoy.

Mother didn’t share much with us about her relationship with the congressman but she did reference a memorable date she had with him at Longacres Race Track.  Knowing my mother, I’m sure she gave him an earful about Executive Order 9066.  I’m certain she let him know in no uncertain terms what a monstrous order it was.  Mother was a compassionate, strong-willed woman who would have had no trouble whatsoever speaking truth to power.

And in this instance the truth was ugly.

One hundred thousand American citizens were sent into nothing more than concentration camps.  Families were forcibly evicted from their homes, their property confiscated for resale, herded onto trains to remote inland camps, and forced to live in cramped barracks, sometimes even separated from their families.  This was an ugly chapter in American history.

But for Theresa McCoy and the hundreds of young women who served with her during the war, this ugly chapter was turned into their finest hour, for it would be they who would breathe humanity, compassion and kindness into Executive Order 9066.  Mother and her team worked tirelessly through the war on behalf of the Japanese internees.  What was a terrible stain on our nation’s history could have been much worse but for the humanity of these young women.

And, what could have been an unmitigated disaster for the career of a young congressman turned out to be nothing more than a speed bump.  He went on to another 40 years of distinguished public service.

Senator Jackson passed away in 1983.  At his funeral Daniel Patrick Moynihan in his eulogy made this poignant observation:

“Henry Jackson is proof of the old belief in the Judaic tradition that at any moment in history goodness in the world is preserved by the deeds of 36 just men who do not know that this is the role the Lord has given them. Henry Jackson was one of those men.”