Nothing characterized my early journey in faith more than doubt.  From the first moment I picked up a Baltimore Catechism, skepticism set in.  I was taught that every person enters the world with the table already set, answers to every question, truth to negate every falsehood, and clear, dark lines defining the good and the bad.

The rule book for life was a time-tested document that had been around for thousands of years.  The metaphysical world in which I began my life was no different than the world of 1500.  My religious curriculum was developed before the Enlightenment.  I learned the very same things as a young boy growing up in the bog patches of Ireland.  The truth of my world was:

I found this troublesome. 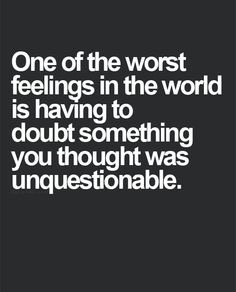 As a child I had the capacity to question.  My mind found bits and pieces of truth in what I was taught but in between the bits and pieces were questions, some big, some small, but always questions.  Questions that could not be snuffed out by the words, “It says so in the book.”  I had my questions whether I spoke them or not.

Then, as I got older fear took hold of me.

So for two decades I became an authority on a whole lot of things.  I took comfort in all that I knew and how much my knowledge would benefit the world.  All the while I was masking a terrifying sense of insecurity and doubt.  The child within, the little curly-headed Pat, was screaming his questions to a grown-up me that would not hear.

The end of my certainty came in 1985 when my questions burst forth like a broken dam and swept away what was my life at that time.

Whooooosh – in the blink of an eye it was all gone and I began my journey with sobriety.

When I came to terms with this tsunami I was delivered back to my doubt. This doubt then became the seed that birthed a whole new area of believing for me, an era that has now extended out more than 30 years.  Doubt has given me the capacity to have faith.

“Doubt is not the opposite of faith; it is one element of faith.”  — Paul Tillich

So maybe sobriety has given me the courage to live with doubt.  To embrace the questions I had as a kid, to learn that reality isn’t such a bad place to hang out.

Maybe doubt is the real father to faith.