“The greatest hazard of all, losing one’s self, can occur very quietly in the world, as if it were nothing at all. No other loss can occur so quietly; any other loss – an arm, a leg, five dollars, a wife, etc. – is sure to be noticed.” Søren Kierkegaard

The danger of losing one’s self grows during times that feel unfamiliar.  Think of how strange our times are.  Measles are back!  I recently heard our era described as the Great Regression. 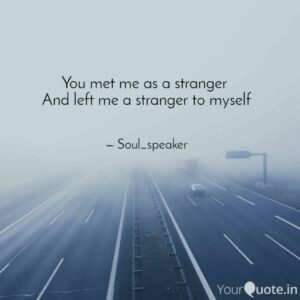 In recent decades we have been traumatized by tragedy and nursed on discontent.  Fear abounds!

”I wonder if we’ve fully grasped how fear pervades our society and sets the emotional tone for our politics. When historians define this era they may well see it above all else as a time defined by fear…We get to the point where the fear itself begins to take control. Fear generates fear. Everybody feels besieged…Fear runs ahead of the facts and inflames the imagination. Ninety percent of the time we’re not afraid of what’s happening to us, but of some catastrophic thing our imagination tells us might happen.”

And yet we look for the “better angels of our nature.”

I read a book about Thomas Paine recently that provided a clue.  It described colonial times in America when our founding fathers lost touch with the way forward.

It occurred on a Sunday night in the winter of 1775 when George Washington, Thomas Jefferson, Benjamin Franklin, John Adams and Alexander Hamilton had gathered for dinner.  They were a tired and worn out lot.

Washington made it clear the Continental Army was under-staffed, under-resourced and out of gas.  If that weren’t enough King George had made it clear that anyone who so much as mentioned the word independence would have their head chopped off.  So as the mashed potatoes and gravy were passed around the table the founding fathers wondered whether the spirit for revolution was dead and gone.

It was then that Ben Franklin introduced a surprise dinner guest.  Franklin was a generation older than the rest.  He knew the temperament of the colonies better than the others.  He knew if the colonies were ever to find their “better angels” they needed a clarifying message and inspirational messenger.

Franklin had found such a message and messenger in the person of Thomas Paine while he’d been stationed in England.  Paine was a part-time corset maker, journalist and ardent supporter of the American cause, and Franklin had become his mentor.

What a memorable night it turned out to be!

Over turkey, cranberries and apple pie, Paine gave new life to their cause.  In plain-spoken words he clarified for them why the revolution was necessary, lifted it to a higher level, and infused in them a new sense of purpose. 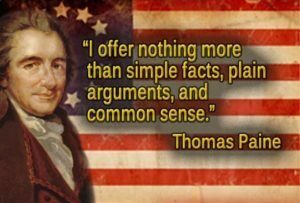 His passion, poise and poetry were electrifying.

Afterwards Paine was commissioned to write a pamphlet that he titled Common Sense.  Twenty percent of the colonists owned a copy of the pamphlet, which became the manifesto of the American Revolution.  The fear that had gripped colonies was extinguished.

Later Paine’s words would be memorialized in the Declaration of Independence, reminding all generations they are neither victims of circumstance nor orphans of history but a citizenry able to rise up always to find the better angels of their nature.

These were the words that Washington chose to read to his starving troops at Valley Forge:

“These are the times that try men’s souls. The summer soldier and the sunshine patriot will, in this crisis, shrink from the service of their country; but he/she that stands by it now, deserves the love and thanks of man and woman.” ~ Thomas Paine

Will we rediscover the better angels of our nature in our time or be summer soldiers and sunshine patriots?  David Brooks suggests we can either wait for another Thomas Paine or become our own inspiration:

“Fear comes in the night. But eventually you have to wake up in the morning, get out of bed and get stuff done.” 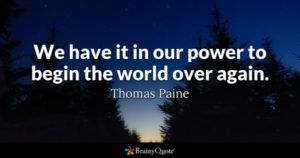