Albert Schweitzer said, “There are two means of refuge from the misery of life — music and cats.”

I walked out my front door the other day and a black cat crossed my path.  Not being superstitious I thought nothing of it, and yet I was a little mesmerized by the silky, stealthy beauty of this marvelous creature.  Say what you will about cats, they have a commanding presence. 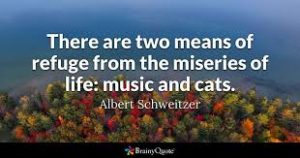 The first time I remember giving much thought to cats was when, quite miraculously, a litter of newborn kittens and their mother suddenly appeared underneath Shelley’s (my sister-in-law) back porch.  I say miraculous because Shelley was in a time of sadness, and it was as though this family of cats had arrived to minister to her.  From the moment they moved from under Shelley’s porch into her home a deep attachment formed.  Three ended up staying permanently, Bella, Scamper,and Fanny, forming a relationship that was to last the better part of two decades.  Our whole family benefited, as we were introduced to the Zen-like nature of cats and their gift for companionship.

How or why cats came to set aside their predatory nature in favor of companionship, no one knows.  That they did is something humans have appreciated for centuries.  This unique bonding ability was in full display when cats were first domesticated in ancient Egypt 4,000 years ago — so much so that they were worshiped as deities. 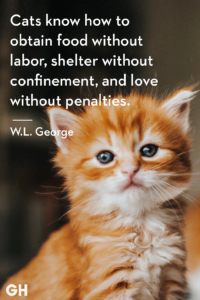 Perhaps we can take certain evolutionary lessons from cats:

This English fable tells the story of how the cat came to live among humans:

Once there lived a cat. She thought, “The lion is the strongest of all the animals. It is good to have strong friends. I shall go to the lion and make friendship with him.” She did so and the lion and the cat were friends for many, many days.

Once they went for a walk together and met an elephant. The lion began to fight with the elephant and the elephant killed him. The cat was very sorry. “What shall I do?” she thought. “The elephant was stronger than the lion. I shall go to the elephant and make friendship with him.” She did so and they were friends for many, many days.

Once they went for a walk and met a hunter. The hunter shot at the elephant and killed him. The cat was sorry, but she thought, “The man is stronger than the elephant, I see.” So she went up to the hunter and asked, “May I go with you?” “All right, let us go home together,” he said. They came to the man’s home.

That’s why you always see a cat in the kitchen at a woman’s feet. 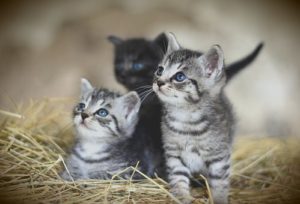 Once Bella, Scamper and Fanny gained entry into Shelley’s house, human and cat blended seamlessly into life together, expanding later to include Greg, Shelley’s husband.  The three cats have since passed on but their lesson endures, ever reminding us it’s better to be a companion than a predator.

Final words in appreciation of the cat:

“In its flawless grace and superior self-sufficiency I have seen a symbol of the perfect beauty and bland impersonality of the universe itself, objectively considered, and in its air of silent mystery there resides for me all the wonder and fascination of the unknown.” ~ H.P. Lovecraft