This past week I turned 70 and for whatever reason this birthday has captured my attention.  After years of paying little mind to the passing of time this particular birthday found me asking what I’ve learned about living a meaningful life.

Hard question.  A lot crossed my mind, but after much thought I’d say the keys to a successful life are keeping yourself rigorously honest, showing up to live each day and accepting whatever comes your way.  Divine Providence will account for the rest. 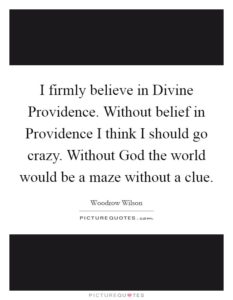 The truth is I’ve not come close to figuring out the riddle that is life; it remains an unfathomable mystery to me.  But at 70 I’m coming much closer to making peace with this mystery and finding my way to acceptance.  I’m getting better at remembering things are not always as they appear, bitter seeds can bring forth sweet fruit, and victory is the flip side of failure.  What I once saw as a trash heap of losses has turned into a gold mine of lessons learned.  At 70 I’ve become more comfortable visiting the trash bin.

When I survey the events of my life the past 70 years what I find is one long exercise in learning to accept life on life’s terms, or put more simply, making Divine Providence my friend.

A pivotal lesson began when I was 25.

I was engaged in a project at the time that I deemed worthy of my heart and soul, and it occupied the better part of three years of my life. I worked with a nonprofit that had pioneered an approach to community development that relied mostly on local initiative.  To demonstrate the efficacy of this approach the Marshall Islands, a coral island group in the South Pacific, was selected as the project site.  A team of us led by Neil Vance, a former Peace Corps volunteer who had been stationed in the Marshalls, were charged with finding the money for the project.

The Marshalls Human Development Project involved the efforts of hundreds of people.  Much of what we wanted to accomplish eventually came to pass, and I had many exciting and fulfilling adventures along the way.  But much more recently things have taken an unexpected twist; we have learned the Marshall Islands likely will not survive the century, a casualty of climate change.

The Marshall Islands: A nation on the brink of extinction
ABC News:

The Marshall Islands, a tiny nation of islands and atolls located between Hawaii and Australia, are in a fight for survival. In a battle between man and nature, officials say climate change is threatening the islands’ existence. The most extreme predictions say that rising sea levels could make the nation uninhabitable as soon as 2030.

The situation clearly is devastating to the Marshallese, and will forever alter their lives and the land that is their home.  (It is worth mentioning that the Marshall Islands has a special “Compact” with the United States that entitles all Marshalls citizens to reside, study, or work in the U.S.  While this provides a measure of security, and an alternate future, it cannot diminish the pain of displacement that will occur.)  Those of us who worked with Neil over 40 years ago did what seemed right with the knowledge we possessed at the time.  All any of us can ever do is learn the language of acceptance.  It’s a language learned not through being smart but getting humble.

Learning the language of acceptance has been like learning how to swim and, if you can swim…you can live to be 70.

One thought on “A Thought on Turning 70”