I read a quote (uncredited) the other day that caught my attention:

It struck me that when I look into the mirror in the morning all four characters stare back: the good, the bad, the worst and the best. 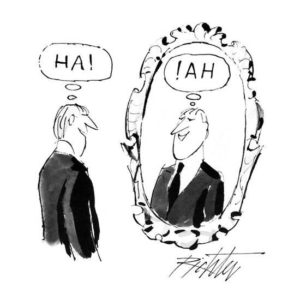 The truth is, my life has been a never-ending search for my best self and when I haven’t found it an errant thought is often to blame:

I fall down a rabbit hole, only to find my worst self — again! 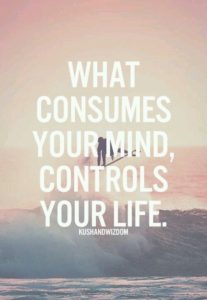 After many rabbit holes, I eventually began the process of learning to be my own thought guard.

As I shared in an earlier post, one summer evening in 1962 my dad and I got into a fight.  I hit him, he stormed out and left on a business trip the next day.  He died a week later from a heart attack.  We never reconciled.  The thought of how things ended between us terrorized me for two decades.

Shortly after we buried Dad I discovered two 16-ounce beers would numb my pain; six would allow me to forget altogether.  I had found a cure.  But the process of pouring alcohol over my unwanted thoughts did more than just numb the thoughts; it numbed the good side of Pat.  The best Pat had a hard time crawling out of that rabbit hole.  After a time, he stopped trying.

Then — suddenly, remorselessly, decisively — 23 years later alcohol stopped working and turned on me like the Grim Reaper.

But even having surrendered frightening thoughts still terrorized me.  I wondered how would I ever stay sober if I couldn’t control my thinking.  The 12 Steps provided an answer. It was in working my ninth step that something momentous happened: I reconciled with Dad.

The step reads: “Made direct amends to such people wherever possible, except when to do so would injure them or others.”

An old timer shared his experience on how to do this Step with those who have passed away.  Shortly before he shipped out for the South Pacific during World War II he got into a nasty scuffle with his dad.  When he left they’d not reconciled and soon after, his father passed away.  Shattered, he, too, began to drink.  After the the war he, too, found the program and, just like I, was challenged as to how to make amends to his dead father.  His sponsor gave him the key: “Remember,” he said, “The 12-Step program is based on a simple fact that our Higher Power can do what we cannot do for ourselves.  So, simply ask your Higher Power to take your amends to your dad for you.”

At the time, I was skeptical, even cynical about such things.  But I’d reached the end of my rope and was willing to go to any length, try anything, to stop the pain. So,

When I left the cemetery it was with a serenity I hadn’t experienced before.  The thought that had terrorized me for years had dissolved. The pain and sorrow lifted and I felt at peace again.  I knew, just knew, Dad and I were reconciled.  God did for me what I could not do for myself.

This experience taught me a great lesson on thoughts: 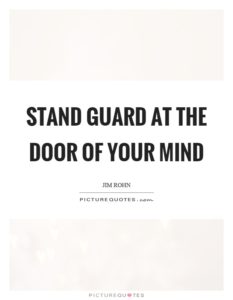 I learned that my mind is a sacred garden in need of tending; for the right things to grow some things must go.  I must be my own gardener.  Thoughts have the power to create and they have the power to destroy.  It is I alone who give them power.

For me to be my best — I must think my best!