“The wind blew — not up the road or down it, though that’s bad enough, but sheer across it, sending the rain slanting down like the lines they used to rule in the copybooks at school...“ ~ Charles Dickens

Never in my lifetime have I felt the winds of history blowing as hard as they are now. I’ve never felt more powerless to effect change. I find myself saying the Serenity Prayer as a kind of daily mantra.

Our family felt the force of this powerlessness in the events that led up to the passing of Marsha’s father.

Charles had struggled with dementia. In the months before the pandemic his condition worsened and the family decided to move him to a memory care facility. Shortly after, on the very day the facility first closed to visitors because of the pandemic, he fell and broke his neck, requiring that he be sent to a nursing home for rehabilitation.

The nursing home also could not allow visitors. After a number of days, they allowed Doris, his wife of 65 years, and younger daughter Shelley, to see him through a glass partition. They were able to wave to him and he waved back. Perhaps he somehow understood the magnitude of change that would affect him and the rest of the world because the next day, he died. 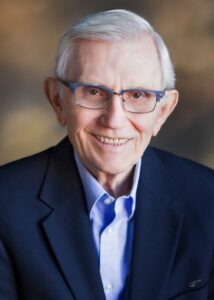 “The wind shows us how close to the edge we are.” ~ Joan Didion

Indeed. The edge is close and sleep is difficult when the wind is blowing.

I suppose we all have our stories of powerlessness. These past two years have given each of us ample reason to feel blown away.

How do we sleep when the winds of history are blowing so hard? The following story, by an unknown author, provides a beautiful illustration:

There was a farmer who owned a farm along the Atlantic coast and was plagued with ever-present stormy weather. He found it difficult to hire help for most farm hands were reluctant to work on farms along the coast. They dreaded the awful storms that raged across the sea, wreaking havoc on the buildings and crops. As the farmer interviewed applicants for the job, he received a steady stream of refusals.

Finally, a short, thin man, well past middle-age, approached the farmer. “Are you a good farm hand?” the farmer asked him. “Well, I do what I can, accept what I can’t, in order to sleep when the wind blows,” answered the little man.

Although puzzled by this answer, the farmer, desperate for help, hired him. The little man worked well around the farm, busy from dawn to dusk, and the farmer felt satisfied with the man’s work.

Then one night the wind howled loudly in from offshore. Jumping out of bed, the farmer grabbed a lantern and rushed next door to the hired hand’s sleeping quarters. He shook the little man and yelled, “Get up! A storm is coming! Tie things down before they blow away!”

The man rolled over in bed and said firmly, “No, sir. I told you, I’ve done all I can do so I can sleep when the wind blows.”

Enraged by the response, the farmer was tempted to fire him on the spot. Instead, he hurried outside to prepare for the storm.

To his amazement, he discovered that all of the haystacks had been covered with tarpaulins. The cows were in the barn, the chickens were in the coops, and the doors were barred. The shutters were tightly secured. Everything was tied down.

Nothing could blow away. The farmer then understood what his hired hand meant. So he, too, returned to his bed with the knowledge of how to sleep while the wind blew.

As Henry David Thoreau reminds us, “Live your life, do your work, then take your hat.”

Charles was a man who knew how to sleep when the wind blew. He’d lived his life, did his work and knew when to take his hat.