“A friend is one to whom one may pour out the contents of one’s heart, chaff and grain together, knowing that gentle hands will take and sift it, keep what is worth keeping, and with a breath of kindness, blow the rest away. Oh, the comfort – the inexpressible comfort of feeling safe with a person – having neither to weigh thoughts nor measure words, but pouring them all right out, just as they are.” ~  Maria Mulock

The kind of friend Abraham Lincoln had in Joshua Speed. 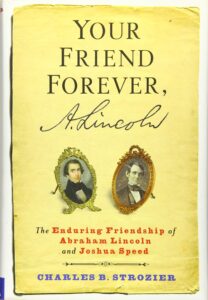 We have come to know Lincoln as a kind of marble man, a pillar of strength, a man of character. We know much less about the broken man, the insecure man, the man who suffered from crippling depression.

It’s hard to imagine Lincoln ever needing saving, but he did, and here’s the story. 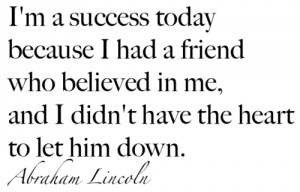 Lincoln was born into a troubled world, filled with many losses. His mother and only sister died before he was twelve. For an entire year his father abandoned him while he searched for another wife. When he returned he beat him for learning to read.

His tormented childhood left him with a debilitating depression and no close friends. It was not until he met Joshua Speed in 1837 that he found someone with whom he could could share his thoughts, even those darkest.

In the winter of 1841 Lincoln learned that Ann Rutledge, his beloved fiancée, had suddenly collapsed and died from typhoid fever. The news catapulted him into a deep depression, so deep he seriously considered taking his own life.

“I am now the most miserable man living. If what I feel were equally distributed to the whole human family, there would not be one cheerful face on the earth. Whether I shall ever be better I cannot tell; I awfully forebode I shall not. To remain as I am is impossible; I must die or be better, it appears to me.” 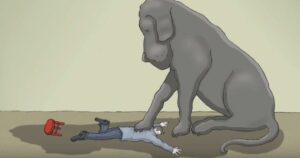 It was Joshua Speed who first recognized the gravity of his condition and dropped everything to be with his friend. He even canceled a trip to be with his ailing father in Kentucky. He stayed at Lincoln’s side for months.

“The language of friendship is not words but meanings.” ~ Henry David Thoreau

Speed was the kind of friend who never wavered in telling Lincoln the truth. His bedside manner may have been startlingly frank but it was also startlingly effective, never failing to beat back the waves of despair that would overwhelm his friend. He lent his friend his strength when he could muster none of his own.

When he found Lincoln contemplating suicide he called him out, pulled him back up and reminded him of his great purpose in life. Speed was the one person who could tame the black dog that trailed Lincoln and reinvigorate his fragile psyche.

“I don’t worry about dying as I’m convinced that I’ve left such an insignificant mark on the world I would quickly be forgotten once gone.”

Lincoln would never forget these words.

It was through Speed’s tireless encouragement that Lincoln recovered, moved forward and carried on with his remarkable life.

“A true friend never gets in your way unless you happen to be going down.” ~ Arnold H. Glasow

Now, there’s a fitting end to this story:

When Lincoln signed the Emancipation Proclamation, Speed visited him at the White House to congratulate him. A secretary recorded the encounter:

“Lincoln took Mr. Speed into his study and gave him a copy of the Proclamation. He reminded him of the conversation they’d had in the winter of 1841 where Mr. Speed had admonished him to make his mark on history. The President told Speed, ‘I believe in this measure my fondest hopes will be realized. The proclamation will redound to the interest of my fellow man.’”

Abraham Lincoln had made his mark on history — he saved the union.

Joshua Speed made his mark on history — he saved Abraham Lincoln.

Here’s to our Forever Friends who help us find our “Better Angels.”