“Interdependence is a fact, not an option.” ~ Peter Coyote

For the longest time I took comfort in being my own boss.  I loved my independence; I thought I was stronger, smarter, more effective when I worked alone.  When I worked with others it meant having to make compromises.

History, however, proved me wrong.  I wasn’t, in fact, stronger, smarter or more effective alone.  Quite the opposite, I often accomplished less, made more mistakes and needed bailing out by others. 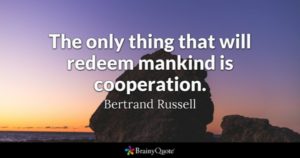 It seemed my primary motivation was fear, not independence, and I discovered as did the biblical Job that living in fear comes with its own brutal judgement.  “For the thing that I greatly feared is come upon me, and that which I was afraid of is come into me.” ~ Job 3:25

What life has taught me is that we share a common bond with nature and in order to survive we must learn to live as the interdependent creatures we are. If we don’t learn or won’t learn then we’re doomed to destroy both ourselves and the very planet that gives us life.

Marsha and I were watching a flock of geese heading north toward Canada.  It was quite a sight.  We both were mesmerized by the tightness of their pattern, the effortlessness of their flying, and the sense of purpose of their path.  Thousands of years have gone into developing this going home ritual.  These geese travel thousands of miles each year to their feeding and mating grounds and have somehow figured out how to

I did a little goose research.  There are some geese that breed in Alaska and Siberia and summer in Australia.  They will travel non-stop and cover the distance in eight days, flying at an altitude of 20,000 feet.

What you don’t see, in these migratory feats of magic, are birds flying solo.  They fly in flocks in a V formation which provides uplift for each trailing bird.  Each bird flapping its wings creates uplift for those behind.  By flying in a V formation the whole flock adds and an additional 71 percent to each bird’s flying range.  So each bird flies 71 percent farther by flying in formation.  When a goose falls out of formation she suddenly feels the draft and resistance of trying to go it alone.  It’s only when she gets back into formation that she reaches that state of effortless pursuit of a destination.  When the lead goose gets tired it falls back in the formation to allow another to take the lead and break the wind.  The honking you hear is from the geese that are behind encouraging those in the lead to keep up their speed.

It gets more interesting.  When one goose gets sick (or shot) and falls out of formation, two geese will fall out with her until she is either dead or can fly again.  They do this so that if they can fly again they will do so in formation to take advantage of the inherent benefit of working together.

A flock of geese had settled to rest upon a pond.  One of the flock had been captured by the gardener who had clipped the wings before releasing it.  When the geese started to resume their flight this one tried frantically, but vainly, to lift itself into the air.  The others, observing his struggles, flew about in obvious efforts to encourage him; but it was no use.  Thereupon, the entire flock settled upon the pond, even though the urge to go was strong within them.  For several days they waited until the damaged feathers had grown sufficiently to permit the goose to fly.  Meanwhile, the unethical gardener, having been converted to the ethical geese, gladly watched them as they finally rose together and resumed their long flight.

We all need to find our flock. 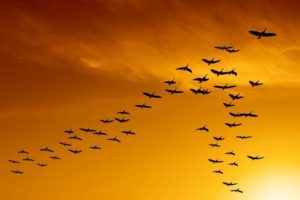