Marsha and I recently watched The Last Dance, a documentary on the final season (1997) of the Chicago Bulls dynasty. A team for the ages. 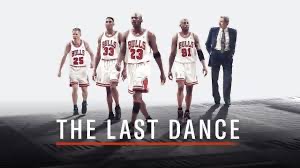 A flood of memories poured in. I lived in Chicago during the years when the Bulls dominated basketball. Chicagoans actually looked forward to winter just to watch them play!

People remember their lead player, the legendary Michael Jordan, but the real story is in how smart they became as a team. Their offensive system was complicated, requiring continual ball rotation aimed a breaking down a defense to find the open man. The Bulls brilliantly gave themselves body and soul to this “triangle offense” and as a result, for a time, they were virtually unbeatable. As good as Jordan was, he didn’t win championships until the Bulls found the players who could execute this difficult offense, and until Jordan learned to trust the players around him. When they did, and when he did, a good team became a great team.

“Good teams become great ones when the members trust each other enough to surrender the ‘me’ for the ‘we.'” — former Bulls coach, Phil Jackson

Watching the Bulls then was like watching a beautifully choreographed ballet.

For me, this dance was being played out as I was learning my own new dance. I had recently married Marsha and was trying to learn what it meant to be a stepdad to Erin. For a time I was baffled. I was the new guy on the team. I wasn’t sure he trusted me. I wasn’t even sure he liked me. All I really knew was that I was stone cold committed to doing anything I had to do to bring our little family together as a team.

Guys have a way of sharing their real feelings in the midst doing something else — like going on a long run or bike ride, playing a round of golf, or throwing a baseball. So, like a good Bulls fan, I set up a basketball hoop in our backyard. Each day after school Erin and I would shoot hoops. To be more accurate, he’d shoot and I’d shag, and all the while we kept up a running dialogue with each other. I learned about him and he learned about me. Our basketball sessions blossomed into a deep friendship that’s going strong 25 years on.

“It is not flesh and blood, but heart which makes us fathers and sons.” – Johann Friedrich Von Schiller

I had not always been such a good team player. 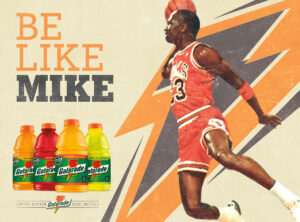 That ad was displayed on a billboard atop the roof of the building in which I had my office. I saw it every day for three years. One day I got a strange thought as I was sipping my morning coffee. What if that billboard read: “Be Like Pat?”

I burst out in laughter! Be like Pat? Why, I don’t even want to be like Pat — and I am Pat! The more I thought about it, the more troubled I became. Why, I asked myself, was I so down on Pat?

When I reflected back over my life I saw a troubling pattern:

I had too much prized my freedom, individuality, and independence. More often than not, I had a “go it alone” attitude, and If there was any glory to be had, it would be my own. I was one of those guys who make team-building difficult — too much me, not enough we.

Needless to say, in the years that followed things changed with me. I settled into my role on the Marsha, Erin and Pat team, now expanded to include Kelly and the next generation, and never looked back. And it’s been a pretty good run. 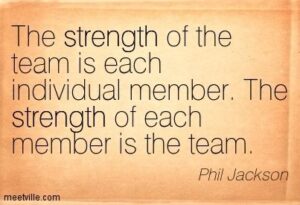