Let me pose this question: Where do you look for your heroes?

Are they the brilliant scientists searching out a vaccine for COVID-19? Are they the brave men and women on the front lines fighting fires? Are they the leaders of the protest movements that now encircle the globe?

Our heroes tell us a lot about who we are and what we value. 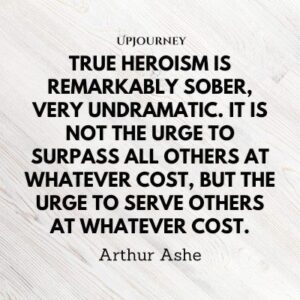 Let me share a picture of a different kind of hero.

So often in our rush to elevate the authors of exceptional acts, we forget the acts of ordinary men and women whose daily work permits us to live the lives we live. These are the everyday doers of good who wouldn’t in a million years see their work as heroic, but think what life would be like without them.

Sisyphus, the Greek mythological figure, sheds light on everyday heroism. He was condemned to push a boulder up and down a hill for eternity as punishment for defying the gods.

Albert Camus, in his book “The Myth of Sisyphus,” suggested that although Sisyphus was being punished, he could turn that punishment into something he could live with, and even be happy.

Think about it: no work better captures the meaningless futility of existence than the plight of Sisyphus. Yet, in a strange way, as so many will attest to, the very act of working, when embraced, can fill the heart with happiness. 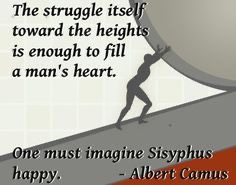 Isn’t there happiness to be found in the mundanity of the moment?

My first boss was a guy named Larry. He was a dispatcher for Global Van Lines, where I worked during the summers during high school and college. I remember how we smart-ass students would ridicule Larry behind his back, dubbing him “Lunch-pail Larry.” We had our eyes set on more heroic work. All the while, Larry, with an eternal smile on his face, gave us work each day so we could earn the money that paid for our schooling, so we wouldn’t be condemned to carry a lunch-pail to work.

Looking back, Larry was among the happiest people I ever met. It would be years before I’d find my own happiness.

In Camus’ book, The Plague, one of the most powerful moments comes in an exchange between the doctor at the center of the novel, Bernard Rieux, and a journalist named Raymond Rambert. Rieux has been battling the pestilence day after day, more often defeated than not. Rambert has been dreaming of, and plotting, escape from the city to be reunited with his loved one. Rieux suddenly speaks his mind:

“I have to tell you this: this whole thing is not about heroism. It’s about decency. It may seem a ridiculous idea, but the only way to fight the plague is with decency.”

“In general, I can’t say, but in my case I know that it consists of doing my job.”

The next day, Rambert calls the doctor and says he wants to work with him in the emergency teams battling the plague. Later in the novel, Rieux says, “I feel more solidarity with the defeated than with saints. I don’t think I have any taste for heroism and sainthood. What interests me is to be a man.”

I am with Rieux when he says, “Salvation is too big a word for me.” I’ve found my heroes among the Lunch-pail Larrys of this world — which means heroism is available to all of us. 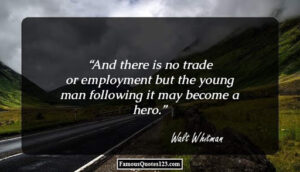