I recently watched the movie, A Christmas Carol (for like the 50th time) and, once again, found my own life visited by the angels of Christmas past, present and future.

Oh, how they never fail to get into my head.

The truth is it’s easy for me to go on cruise control and become a little numb to the suffering around me. As Marley reminded Scrooge, the question is not: 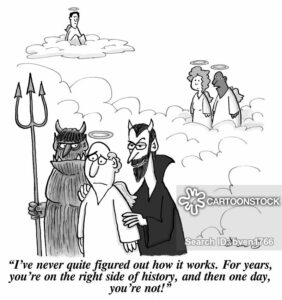 Sometimes, I tie the Serenity Prayer into a Gordian knot — ”God, grant me the illusion I can change things I can’t; an excuse for why I don’t change the things I can; and an alibi for not knowing difference.”

It’s never my intent to game myself like this, it’s just whenever I get a guilty conscience I get defensive.

And the thing is, all this can happen without me being conscious.

So each year Scrooge and company send me a clear message to reset my moral compass to true north. This was exactly the message Dickens had in mind when he first published this story. He challenged English society to take a long, hard look at how it treated the poor. 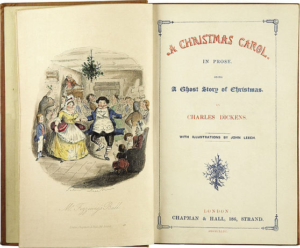 Here’s the story behind the story:

In 1843, thirty-one-year-old Charles Dickens decided to write a short story based on what he saw walking the streets of London. Dickens was a “walkaholic,” a restless guy, and an insomniac. He would often cover five to 30 miles a day just walking around London, sometimes walking all night. He walked fast but his speed didn’t stop him observing things: he compared his mind to a photographic plate and was able to remember everything he saw.

Dickens was a popular author. His work appealed to the masses because he gave them a peek into parts of London to which they would dare not venture. His stories allowed people to see the truly horrible conditions in which most people lived. In September of 1843 Dickens visited the Field Lane Ragged School. In a letter to his friend, Miss Coutts, he described what he saw at the school:

“ I have very seldom seen, in all the strange and dreadful things I have seen in London and elsewhere, anything so shocking as the dire neglect of soul and body exhibited in these children.  And although I know; and am as sure as it is possible for one to be of anything which has not happened; that in the prodigious misery and ignorance of the swarming masses of mankind in England, the seeds of its certain ruin are sown.”

Dickens conjured up Ebenezer Scrooge, “a squeezing, wrenching, grasping, clutching, covetous, old sinner!”  (Sound familiar?) Scrooge represented the self-serving upper classes, while his poorly paid clerk, Bob Cratchit, and his family, including sickly Tiny Tim, represented the deserving poor. Since his own family had once been poor, Dickens’ wrote with the authenticity of first-hand experience.

The story took place at Christmas, a holiday in England that included charitable giving — the perfect setting for his message. Dickens sent Scrooge on a wild night’s journey, visiting his childhood to learn why he’d become such a miserable miser, and foreseeing a grim future that awaited if he didn’t change his ways. By sunrise Christmas morning he was a new man. His hard heart had melted and he became a good friend to the poor, beginning with the Cratchit family. He resolved to “honor Christmas in my heart, and try to keep it all the year.”

To Dickens’ delight, his readers made A Christmas Carol their own, and Christmas, which had previously been a rather minor holiday in England, began to change into a season of generosity toward the poor.

The book is as popular today as it was over 175 years ago. Through the transformative story of Scrooge, I can say I’m taking a fresh look at Everett, Washington, the town I now call home. 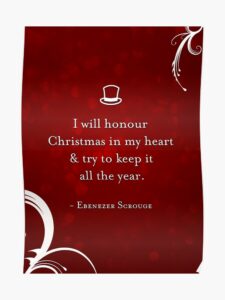 Thank you, Ebenezer — I got your message.