Oath of Jurors: It is your duty to base your verdict solely upon the evidence, without prejudice or sympathy.

I was recently called for jury duty and learned a thing or two about the jurors’ oath.  Rendering a verdict solely upon the evidence, without prejudice or sympathy, ain’t that easy.  I found I was a guy filled with his own peculiar brand of bias cleverly disguised as my truth.  How is it that one person’s truth becomes another person’s bias? 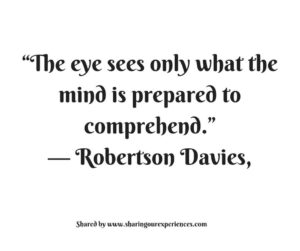 So here’s my story of jury duty.

A judge in the Superior Court of Snohomish County described to us a case in which the State of Washington would assert the defendant, a convicted child sex offender, ought not be released from prison upon the completion of his sentence because he remained a clear and present danger to the community.  The question before us was, could we rely only on the evidence presented us, and not on our biases, in rendering a verdict on whether the defendant be involuntarily incarcerated for an indeterminate amount of time.

Wow! I looked over at this convicted felon.

Try as I would to focus on those questions, my thoughts went straight to my grandson, Sam.  I superimposed the crime onto my grandson, at which point all rational thought collapsed amidst an avalanche of hatred for the defendant.  I was buried in bias.  The defendant morphed into the face of evil.

Damn, I thought biases were the domain of small, bigoted people, not “enlightened” people like me.

Then I looked back over at the defendant, a guy who’d been broken and shattered into a thousand bits and pieces.  From what I heard from my fellow jurors, pretty much everyone, at that point, would have been ready to lock him up and throw away the key, and for no other reason but to allay our own fears.

“We can at least try to understand our own motives, passions, and prejudices, so as to be conscious of what we are doing when we appeal to those of others.  This is very difficult, because our own prejudice and emotional bias always seems to us so rational.”  —  T.S. Eliot

Clearly the question hung on whether any of us could get beyond our loathing for the crime for which he’d been convicted.  Could we focus only on the evidence and not simply fixate on our little Sams?  Based on what I heard none of us would have an easy time of it.

The judge dismissed us for the day.

“I think unconscious bias is one of the hardest things to get at.”  —  Ruth Bader Ginsburg

As I walked home I thought long and hard about If I could or even wanted to get beyond my bias.  I said little to a Marsha that night and went to bed deeply conflicted.  The next morning I entered the courtroom knowing a jury would be paneled by noon.  I looked over at the defendant.  He was seated with his hands folded, staring down at the table.  He looked, at that moment, like any average, everyday guy,  just a guy in a world of hurt.

Then a strange conversation commenced in my head.  What if I were he, and he were me?  What if our roles were reversed?

The State’s attorney then commenced with questioning.  Astonishingly, he asked Juror 63 (me), if I could render an impartial verdict.  I said yes, I could, and that it came to me this morning when I looked over at the defendant.  I imagined what I would ask from a juror if I were he.  In other words, I stood, for a moment, in the defendant’s shoes.

The moment reminded me of a scene from To Kill a Mockingbird when Atticus Finch explains to Scout, his daughter, how bias is defeated in this world. 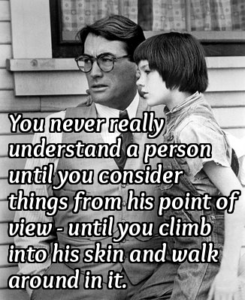 I was not selected to serve, but had I been, I realized I could have!