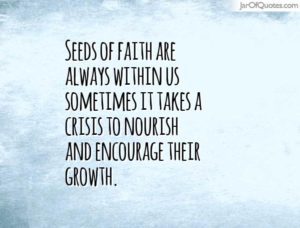 What are seeds of faith?  I suppose the answer is different for each person, but for me, more often than not they come as small revelations in times of deep crisis when I’m grappling with forces pulling in opposite directions.  For me, faith is not so much an idea but an identity, not so much about believing but becoming.

My teachers have generally been fellow travelers on the way, men and women who walk their talk and have taken the time to share their faith with me.  My first great teacher was introduced to me by my mother, a fellow by the name of Huckleberry Finn.

It was 1957 and I’d just entered the second grade when all hell broke loose in Little Rock, Arkansas as nine black students attempted to enroll at all-white Central High School.  At breakfast mother would play the radio and we’d all listen to the morning news.  I have vivid memories that fall of hearing the term racism used when reports were coming out of Little Rock.  Later when friends of my parents came over I heard the adults debating whether integrating schools was a good thing, whether white kids should go to school with black kids.  It was then I learned that some of our friends were racist.

It was all very shocking and disturbing to me.  My eight-year-old mind had trouble processing what I was hearing.  Did God really divine that the races be separate?  Why would God support racism?  I was having a crisis of faith.

Mother observed this struggle.  Her children were having difficulty in sorting out the meaning of this dreadful news.  She understood we needed a way to experience what we were hearing so that we got the right message.

We had a family ritual at bedtime.  Once we were all tucked into bed Mother would read to us.  So it was in the fall of 1957 during this early struggle in the civil rights movement that Mother read us the Adventures of Huckleberry Finn by Mark Twain.

We were introduced to two remarkable friends, Huck Finn and Jim, a runaway slave.  Their adventures were so real to me I couldn’t wait for bedtime to hear what would happen next.  They always had each other’s backs on their extraordinary trip down the Mississippi River.  Jim was running away from his master and Huck was running away from his abusive father.  Huck knew that he was breaking the law in helping Jim run away and, even worse, committing a damnable sin.  Jim was the property of another man and it was both a crime and a sin to steal.

Huck had been taught he would go to hell for his sins.  So in a fit of sanctimonious remorse he wrote a letter to the authorities confessing his sin and his intention to turn Jim in.  But from the outset this decision did not sit well with him; his conscience burned in the opposite direction.  His experience of Jim was of a caring, faithful friend.  Jim had planted in Huck the seeds of faith.

Here’s how Huck tells his story:

I felt good and all washed clean of sin for the first time I had ever felt so in my life, and I knowed I could pray now. But I didn’t do it straight off, but laid the paper down and set there thinking – thinking how good it was all this happened so, and how near I come to being lost and going to hell.

And went on thinking.

And got to thinking over our trip down the river; and I see Jim before me, all the time; in the day, and in the night-time, sometimes moonlight, sometimes storms, and we a floating along, talking, and singing, and laughing.

But somehow I couldn’t seem to strike no places to harden me against him, but only the other kind.

I’d see him standing my watch on top of his’n, stead of calling me, so I could go on sleeping; and see him how glad he was when I come back out of the fog; and when I come to him agin in the swamp, up there where the feud was; and such-like times; and would always call me honey, and pet me, and do everything he could think of for me, and how good he always was; and at last I struck the time I saved him by telling the men we had smallpox aboard, and he was so grateful, and said I was the best friend old Jim ever had in the world, and the only one he’s got now; and then I happened to look around, and see that paper.

It was a close place. I took it up, and held it in my hand. I was trembling because I’d got to decide, forever, betwixt two things, and I knowed it. I studied a minute sort of holding my breath, and then says to myself, “All right, then, I’ll go to hell” – and I tore it up. 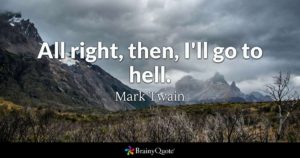 When mom read these words, “All right then, I’ll go to hell,” my heart leaped for joy.  Huckleberry Finn, in tearing up his confession, planted the seeds of faith in me just like he’d done for my mother.  I was given a new pair of glasses as I watched those nine brave students run the gauntlet each day on their way to Central High School.

The Little Rock Nine, along with my friend Huckleberry Finn, taught me an important lesson.

Sometimes the path to faith leads through hell.

One thought on “Finding Faith”