“When you’ve spent two years trying to wiggle just one toe everything else is brought into proportion.”

I have a suggestion when you’re at the end of your rope and feeling:

Imagine yourself taking a short walk down the driveway of Franklin Roosevelt’s Hyde Park home to the Albany Post Road.  It’s just 100 yards.

The thing is, you can’t use your legs.

In the summer of 1921 the Roosevelt family were vacationing at their Campobello summer retreat.  That same summer the Boy Scouts had gathered at Bear Mountain for a jamboree.  So important was the event in the scouting world that it even attracted a visit by Franklin Roosevelt, the former Assistant Secretary of the Navy and 1920 Democratic Vice Presidential nominee.  Roosevelt loved to sail and he enjoyed taking the boys out on his boat.

Even though his party lost the election, FDR was a big name in the Democratic Party; no star shown any brighter.

FDR had everything going for him, until he didn’t.

No one will ever know the name of the boy scout who changed Roosevelt’s world that summer.  Odds are he never knew the impact he made.  It is, however, a certainty that he was carrying the polio virus.  The truth is only one of of every 200 infected people will ever come down with the paralytic disease, but Franklin Delano Roosevelt was one of those people.  He was only 39 and his legs were paralyzed.  His mother begged him to retire to Hyde Park.  The world saw him as a cripple; it was thought his political career was over.

These were not enlightened times when it came to how people viewed those with disabilities.  People were ostracized, hidden away, and closeted.  The times dictated Roosevelt must leave the playing field of life.

FDR had nothing going for him, until he did.

It was his wife Eleanor who came up with a crazy plan, one so bold and outrageous that it was shared with no one.  The plan at its core would hide the fact that FDR was paraplegic.

So he had a challenge.

The great challenge motivating FDR for two years was finding the way to propel himself 100 yards down his driveway with 10-pound steel braces wrapped around his dead legs. 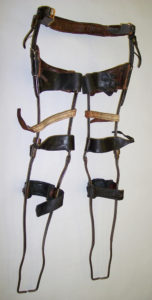 How many times he fell, how much gravel he’d eaten, is not known.  Day after day, week after week, month after month, FDR would attempt to navigate this eighth of a mile driveway.  When a neighbor asked if he’d ever made it without falling, he just winked.

FDR understood the admonition: FAKE IT TILL YOU MAKE IT.

The journey to Albany Post Road ended at the 1924 Democratic National Convention when he was asked to place the name of Al Smith in nomination for President of the United States.  There, thousands of Convention delegates witnessed a man completely paralyzed from the waist down seemingly walk the 100 feet from the entrance to the lectern. 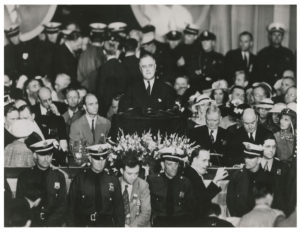 Then, for 30 minutes, he gave the nominating speech.  He would forever be viewed as a conquering hero and not as a broken invalid, and yet he never regained the use of his legs.

FAKE IT TILL YOU MAKE IT.

I, like perhaps many of you, grimace when I think about my own journey to Albany Post Road.

But then the thought strikes me of what awaits me in just 100 yards if I get up and find my way down the road.  For me, it is the road of recovery.

Wasn’t FDR correct when he observed, 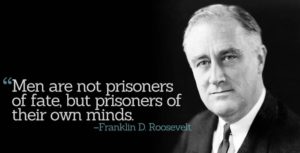